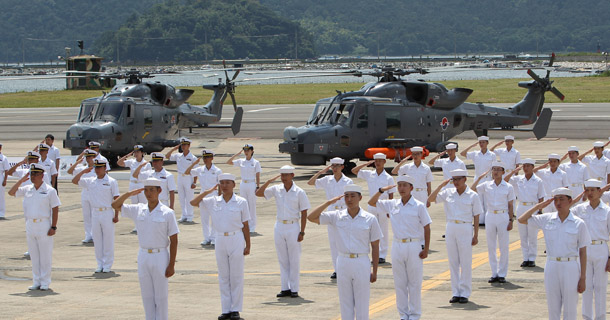 The Republic of Korea Fleet Command holds a ceremony for the acquisition of four AW159 Wildcats and the establishment of a new helicopter squadron for maritime operation helicopters in Jinhae, South Gyeongsang, on Wednesday. The Wildcats are expected to be deployed in mid-2017 and are planned to be loaded in naval destroyers or naval convoys to perform anti-submarine warfare, anti-surface warfare and search and rescue operations. The Wildcat features an active electronically scanned array (AESA), sonar radar and electro-optical thermal equipment. The Korean Navy is expected to acquire four additional Wildcat helicopters from Leonardo-Finmeccanica, the Italian manufacturer, by the end of this year. [SONG BONG-GEUN]