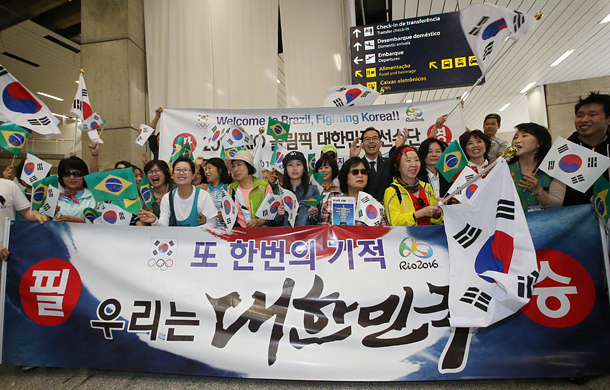 Some 100 Korean residents in Brazil greet the first contingent of the Korean delegation, comprising 97 athletes and 23 officials, at Galeao International Airport on Wednesday in Rio de Janeiro. [JOINT PRESS CORPS]

The first contingent of the Korean Olympic team arrived on Wednesday in Rio de Janeiro to a warm welcome from the overseas Korean community in Brazil.

Ninety-seven athletes and 23 officials from Korea’s 331-member delegation landed in Rio after departing from Incheon International Airport on a chartered plane a day earlier. The group was greeted in the arrival hall to loud cheers by some 100 Korean residents in Brazil.

According to Yonhap News Agency, Korea Football Association President Chung Mong-gyu, head of the Korean delegation, said upon arrival, “We came a long way. We will perform as we prepared and will try to meet South Korean people’s expectations.”

The second contingent left Incheon International Airport on Thursday for the 25-hour flight to Rio. This group includes three male archers - Kim Woo-jin, Ku Bon-chan and Lee Seung-yun - and three female archers - Ki Bo-bae, Chang Hye-jin and Choi Mi-sun - whose expectations are high for this year’s Summer Games, as Korea is traditionally dominant in the sport. 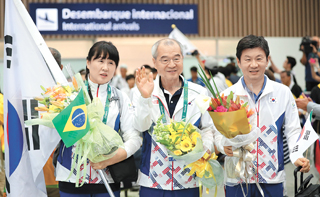 The expectations are especially high for the female team. If the Korean female archers win gold again this summer, it will be the eighth straight Olympics in which Korean women have dominated the event.

Ki, the team’s ace and reigning gold medalist from the 2012 London Games, is looking to take home her second straight Olympic gold.

Events such as judo, taekwondo and shooting are also expected to once again be gold mines for Korea, as it aims to finish within the top 10 in the medal tally.

Golf, which is returning to the Olympics for the first time in more than a century, offers Korea a new opportunity to medal. Team members Park In-bee, Kim Sei-young, Amy Yang and Chun In-gee are some of the world’s top female golfers.

Pak Se-ri, the LPGA hall of famer who will lead the team as its head coach, said on Wednesday during a press conference in Seoul that she expects the team to sweep the podium this summer.

The Korean golfers will travel to Rio individually after this weekend’s Women’s British Open.

In football, Korea is a reigning bronze medalist, and team manager Shin Tae-yong said he hopes this year’s squad will match - and perhaps go beyond - the feat from 2012.

The Korean football team is already in Sao Paulo, about 900 miles south of Salvador where their first match against Fiji will take place.