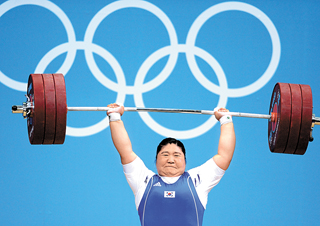 Retired Korean weightlifter Jang Mi-ran, who finished fourth during the 2012 London Olympics in the 75-plus-kilogram category, may be able to claim bronze from the event.

In the latest revelation from the worldwide doping scandal, the International Weightlifting Federation (IWF) announced Wednesday at its headquarters in Budapest that 11 weightlifters from the London Olympics tested positive for drug use after the organization re-examined blood and urine samples from 2012.

Of the 11, six medaled in London, including Hripsime Khurshudyan of Armenia, who took home bronze in the event where Jang finished fourth.

According to the IWF, the Armenian tested positive for stanozolol, a synthetic anabolic steroid derived from dihydrotestosterone.

Despite the loss, Jang received a loud round of applause from spectators for her respectful attitude and competing despite a shoulder injury.

If Khurshudyan is stripped of her bronze medal, Jang will be able to claim bronze and become the first Korean weightlifter to medal in three different Olympics.

Kang Jung-ho of the Pittsburgh Pirates added four runs batted in (RBI) to lead his team to a 10-1 win against the Seattle Mariners on Wednesday at PNC Park in Pittsburgh.

During the game against the Mariners, Kang played as the third baseman and batted fifth for the Pirates. He had one hit and a walk during his four at-bats. The game was leveled up until the third inning, when the Pirates added three runs at the bottom. At first, it was Jordy Mercer’s double that drove home Josh Harrison to tally one run. Two plays later, Andrew McCutchen hit another double for the Pirates and brought home Mercer, who was at third base by then. Finally, Kang grabbed four balls with bases loaded to enable David Freese to score.

The Pirates scored again at the bottom of the seventh, and this time, it was Kang who was responsible for three out of the four runs scored.

Kang doubled on a line drive during his third at-bat against Mariners reliever Nathan Karns’ 79.9-mile-per-hour knuckle curve while bases were loaded and brought all three runners home, adding three RBIs under his belt. The Pirates extended the lead to 7-1.

Kang’s four RBIs against the Mariners is the most he has had in a single game this season. As of Thursday, Korea time, Kang is batting .241 with 35 RBIs and 23 runs scored.