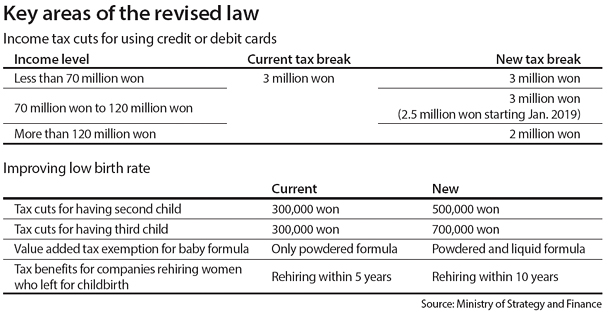 The government revised tax laws in the hope of boosting the economy.

The Ministry of Strategy and Finance announced Thursday that it will extend some income tax deductions for credit or debit card use for three more years, or until the end of 2019. Currently, all Korean workers receive tax cuts of up to 3 million won ($2,666) off their income tax if they have made a certain amount of purchases on debit or credit cards. The point was to discourage cash payments, which some vendors do not declare to evade their own taxes.

The benefit was supposed to come at the end of this year, but the government decided to extend it for people in low and middle income groups.

“We will extend the tax cuts for relatively low income groups and reduce them for high income groups,” said a Finance Ministry official. 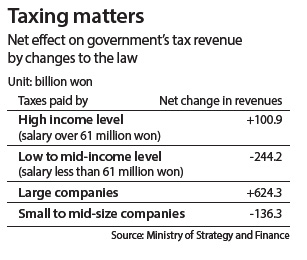 The revisions also include incentives for families to have children.

In particular, the government will expand income tax deductions for Koreans having more than one child.

“We will also give tax cuts to small to mid-size companies that hire women who have left the workforce after having a child,” said the Finance Ministry.

The government will encourage mothers to return to their jobs by reducing income tax and corporate tax for companies who rehire them. Currently, companies were able to apply for the benefit if they re-hired mothers who left the workplace within five years. That period will be extended to 10 years.

According to the Finance Ministry, the government will also offer tax cuts of up to 30 percent for research and development projects for 11 growing industries, including smart cars and robots, and 10 percent tax cuts for facilities investments in such industries.

“Many developed countries around the world including the United States and China are making huge amounts of money to develop new industries so they can become new growth engines for the economy,” said an official at the Finance Ministry. “It takes time and large amounts of investments and it also is very risky. Our goal is to give tax benefits to companies who do research and development in these sectors and for those who invest in such areas so that they can become more risk-taking.”

The Finance Ministry added that media content or hallyu, the Korean wave of cultural content, are key areas for improving Korea’s brand image. They are also good for exports and in attracting tourists, as was seen with the popular Korean drama “Descendants of the Sun.”

That television series created 1 trillion won in economic effects and created nearly 4,500 new jobs in Korea and overseas, according to the Export-Import Bank of Korea.

The government will offer 10 percent tax cuts for small and mid-size content-producing companies and 7 percent off for large companies that make movies, dramas and documentaries. Companies producing such content starting from the beginning of next year will be able to apply for the new tax benefits.

More foreign tourists can now apply for value added tax refunds on their expenditures here in Korea before they return to their countries.

“We will also extend tax benefits for foreigners who come to Korea for cosmetic surgery until the end of next year in order to attract more foreign patients,” an official at the Finance Ministry said.

In order to boost jobs, the government decided to give tax benefits to services industries that create new ones.

Currently, 362 businesses or 62 percent of 582 services-related sectors were eligible for such benefits. The government will extend the benefit to 99 percent of services, only excluding drinking establishments. Newly added services include sports-related businesses such as swimming pools and ski resorts, real-estate agencies and coffee shops.

The revised tax laws will be sent to the National Assembly on Sept. 2 for approval. The ruling Saenuri Party has emphasized the need of creating an environment in which more Korean women will want to have children and this request was included in the revised law. However, opposition parties have called for a hike in corporate taxes for large companies. The Finance Ministry did not agree.

Currently, large companies’ corporate tax rate is 22 percent, and the opposition said it should be raised to nearly 25 percent.