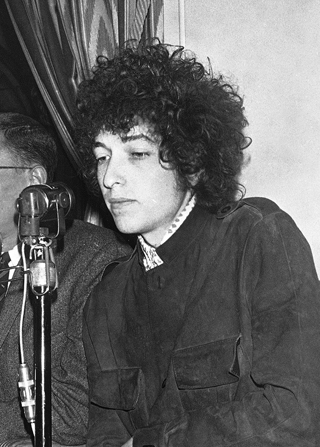 In this May 22, 1966 file photo, Bob Dylan gestures during a press conference in Paris, France. Dylan’s tumble from his Triumph in Woodstock, N.Y., 50 years ago on July 29, 1966, was the most analyzed motorcycle crash in pop-culture history. But for all its import, details surrounding the crash remain foggy. [AP/NEWSIS]

WOODSTOCK, N.Y. - Bob Dylan tumbled from a Triumph motorcycle on a sunny Friday morning here 50 years ago on July 29, 1966. The banged-up musician holed up in the mountains of upstate New York for months afterward, dramatically altering the rocket ride of his career.

It’s the most analyzed motorcycle crash in pop-culture history, but details have been as hard to pin down as the meaning of a Dylan lyric. Biographers, reporters and Dylanologists digging into the ‘60s period when the singer-songwriter lived in this arts colony with his young family have uncovered sometimes contradictory information.

The sun got in his eyes. The bike slipped on an oily patch. He flew off the bike. He simply tipped over. He broke his back. He got a concussion. That is, unless he didn’t really hurt himself. Or maybe the crash was a tall tale.

Dylan has talked about the crash, but often in general terms. “I had been in a motorcycle accident and I’d been hurt, but I recovered,” he wrote in his memoir, “Chronicles.” The few witnesses have remained tight-lipped.

Ambiguity surrounding an accident that indelibly marked the 25-year-old’s life and music has helped it take on near-mythic dimensions.

When something’s not right it’s wrong

A two-sentence story published four days later in The New York Times under the headline “Dylan Hurt in Cycle Mishap” said he was under a doctor’s care. Rumors sprouted over the following months that he was gravely injured, blind or disfigured. Over the years, Dylan has indicated that he broke a vertebra and got a concussion.

But without a police report, there is no official record of the crash.

It’s possible Dylan crashed shortly after pulling out of the Woodstock home of his manager, the late Albert Grossman. Howard Sounes writes in “Down the Highway” that Dylan was being followed in a car by his wife, Sara, who took her injured husband back to Grossman’s house.

Grossman’s wife, Sally, was there and saw Dylan “kind of moaning and groaning” but noticed no obvious signs of injuries, according to Sounes. Sally Grossman declined comment for this article.

A likely spot for the crash is along or near Striebel Road, a winding, hilly ribbon of road running by that house.

Shelter from the Storm

Dylan was driven about an hour to Middletown to the home of a doctor he knew, Dr. Ed Thaler.

Dylan arrived “very upset,” the doctor’s widow, Selma Thaler, said in an interview with The Associated Press. “He didn’t want to go to the hospital, so we said, `You can stay here.”’

Dylan stayed in a third-floor bedroom of the Thaler home for about a month, eating dinner with the family and having friends over on Friday nights, including Allen Ginsberg and the musicians who would later become famous as The Band. They showed a movie on the living room wall. She thinks it was the Dylan documentary “Don’t Look Back.”

Dylan was sweet and quiet, Thaler said, but she can’t recall him showing any visible signs of injury. She believes he broke his neck.

Because the world’s gone wrong

The accident gave Dylan a chance to hit reset and revive himself.

By 1966, Dylan had gone from an up-and-coming folkie to the voice of the ‘60s generation, and he was uncomfortable with it. Woodstock had become a “nightmare,” with moochers at his door and goons breaking in. “Everything was wrong, the world was absurd,” he wrote in his memoir.

Some Dylan historians have suggested the motorcycle wreck may have saved his life. He was exhausted from constant touring and, according to some accounts, had been taking large amounts of amphetamines while on the road in 1966.

After the accident, tour dates were put off, and he lay low in Woodstock.

Dylan told a New York Daily News reporter who found him there in May 1967 that he’d been seeing close friends, “poring over books by people you never heard of” and thinking about where he was going.

Now you don’t talk so loud

Dylan seemed to go silent after the crash. He would not tour again for years, and his next album, “John Wesley Harding,” wasn’t released until December 1967.

But he quietly was writing and making music by early 1967. He and the musicians of The Band recorded at Dylan’s house, and later at a garishly painted home rented by band members in nearby Saugerties dubbed “Big Pink.” Bootleg recordings from this time were eventually released in 1975 as “The Basement Tapes,” and then as part of a deluxe box set in 2014. They include some of Dylan’s most haunting and enigmatic songs, among them “I Shall Be Released,” “Tears of Rage” and “This Wheel’s on Fire.”

Critics now view this creative period outside the spotlight as a vital step in Dylan’s evolution.

You can’t come back all the way

Dylan and his family moved to New York City’s Greenwich Village by 1970, leaving Woodstock in his rearview mirror.

In interviews over the decades, Dylan has offered some details _ sun in his eyes, flying off the bike. But he dwells more on how it marked the end of a busy and unsustainable period in his life.

Dylan is now a 75-year-old artist who tours regularly and has put out dozens of albums. The accident is a long-ago footnote in a lengthy career, but there’s evidence that Dylan did indeed look back at least once.

He came back to visit Thaler’s house about four years ago, she said. He stopped with some of his band members before a show in the area, revisiting the house in which he took shelter that morning in 1966. AP