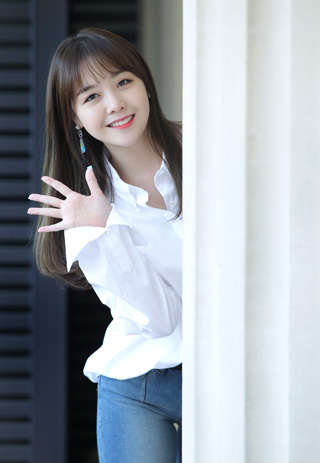 Most people were concerned when Min-ah of Girl’s Day was cast as the female lead of the SBS drama “Dear Fair Lady Gong Shim.”

After all, she doesn’t have much experience in acting. She debuted as an actress only last year, taking on minor role in an MBC drama for which she was not really critically praised.

But as the drama unfolded, viewers were pleasantly surprised.

“I know most people were concerned but I didn’t really pay attention to such voices,” she told Ilgan Sports, an affiliate of Korea JoongAng Daily. “I tried really hard and when I played Gong Shim, I thought of my training years being scolded a lot.”

Gong Shim is the younger sister of Gong Mi, who is a hotshot lawyer with good looks to boot. She always tries to measure up to her sister, “the smart and pretty one in the family,” but more often than not she fails.

The 20-episode drama ended on July 17. Below is an edited excerpt of the interview.

A. I feel so attached. She is hilarious and also a little eccentric. Until she finds her love, she is quite lonely, too. I’m so sad to have to say goodbye to Gong Shim.

Gong Shim wears a wig in the drama [as she suffers from hair loss]. Wasn’t that a challenge?

It was as the weather got hotter. But at the same time, I’ll miss wearing the wig. I actually wanted to keep it, but I had to return it. [laugh]

What was most difficult part of filming?

I have to say lack of sleep. We filmed 5.5 days a week. And near the end I slept 40 minutes for four days. I literally stayed awake for days.

You actually have a sister. Did you ever feel like you couldn’t measure up to her or anybody else in terms of looks?

I don’t think I’m ugly, but I also know I’m not a traditional beauty. But still, when I see people negatively commenting on my looks, it bothers me. I guess that says that I’m not that confident.

Many people are comparing you to Hye-ri [also of Girl’s Day] as both of you began acting careers last year.

Actually, we both felt uncomfortable about how people created rivalry between us and loved to evaluate who is better. We do give each other positive motivation, but we’re not competing.

What’s next for Girl’s Day and for you?

We are preparing an album to be released in September. After that, I am not sure if I’ll be working on a solo album or another gig in acting. For now, it’s all about Girl’s Day.