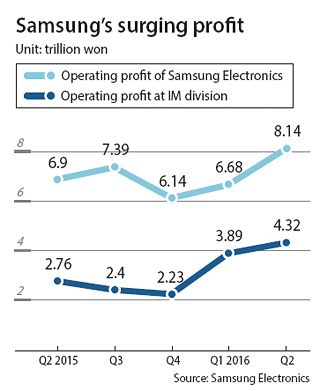 Second-quarter operating profit at Samsung Electronics surged 18 percent from a year earlier to 8.14 trillion won ($7.23 billion), the highest level since 2014, according to earnings results released on Thursday.

Increased profit in the IT & Mobile Communications (IM) division, responsible for smartphones Galaxy S7 and other mobile devices, served as a key propeller. Operating profit in the IM division was 4.32 trillion won for the quarter, accounting for 53.1 percent of total operating profit at the tech giant.

Total revenue for the second quarter ticked up 5 percent year-on-year to 50.94 trillion won.

“Expanded sales of flagship products such as the Galaxy S7 and S7 Edge and streamlined mid-to low-end smartphone lineup,” helped the company substantially improve earnings, Samsung said in a release.

The world’s top smartphone maker sold 90 million mobile phones and 6 million tablets in the second quarter, said Lee Kyeong-tae, vice president of the IM division at Samsung, on Thursday. Of all the mobile phones sold during the period, about 85 percent are smartphones with an average sales price of $210, he added.

Of the Galaxy S7 series, unveiled in February, the higher-margin S7 Edge made up 55 percent of sales and the curved-screen model is seen to boost its share of the pie in the second half, Samsung said.

“It’s not easy to sustain growth in the saturated smartphone market,” said Kwon Sung-ryul, an analyst with Dongbu Securities. “Samsung has succeeded in laying a stepping stone for high margins by coming up with products designed for the era of low growth, high competition.”

Operating profit at the semiconductor division, the second-most profitable sector for the company, slumped 22.4 percent year-on-year to 2.64 trillion won, hit by continued weakening of the prices of dynamic random access memory (DRAM), its key product, and depressing demand for it. Sluggish demand for smartphones and computers has dealt a blow to memory chip producers, in general.

But the launch of new smartphones and the increasing adoption of 6-gigabyte memory chips in high-end smartphones will spur shipments of mobile DRAM and high-density, premium SSD products in the second half, Samsung predicted.

The consumer electronics division at Samsung saw its operating profit increase almost fivefold in the April-to-June period, on the back of strong sales of premium products such as super-ultra high-definition TVs and Chef Collection, which consists of a refrigerator, washer and air conditioner.

In the latter half, which traditionally has strong seasonal sales, Samsung anticipates increased demand for smartphones and tablets. Market competition is also expected to heat up as Apple, its biggest rival, is set to release the iPhone 7 in September.

Shares of Samsung Electronics closed down 1.31 percent at 1,507,000 won on Thursday. Investors are eyeing whether the latest momentum of the nation’s most valuable company will continue through the second half.

Ahn Hyuk, an analyst from Korea Investment & Securities, predicted a week ago that shares could soar to as much as 2.3 million won. Many other analysts, however, say earnings will slide in subsequent quarters.

Greg Roh, head of research at HMC Investment Securities, said, “It’s true that high-density NAND flash memory chips and OLED TVs from Samsung have great potential but they can barely replace the mobile division, the key profit source. We need to consider the possibility that Samsung hit the peak with the second quarter.”

The company also announced on Thursday it would launch the fourth and final phase of its 1.8 trillion won share buyback program. Samsung will cancel 990,000 common shares and 230,000 preferred shares and the process will take approximately three months to complete.

Meanwhile, LG Electronics said on Thursday its April-to-June profit more than doubled from a year earlier to 585 billion won - the highest in two years - thanks to record sales of appliances and televisions.

The company offset a 153.5 billion won operating loss from the mobile division.