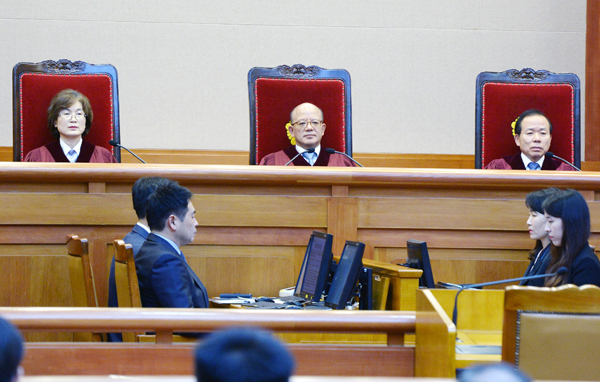 The court rejected all constitutional challenges to the Improper Solicitation and Graft Act, often referred to as the Kim Young-ran law after the former head of the anticorruption commission who authored the initial draft, ruling that the law is legitimate.

After years of debate, the National Assembly passed a tough antigraft bill in March 2015 despite worries about its scope. The act is scheduled to take effect Sept. 28, 2016.

The law defines “public officials” broadly. Aside from civil servants and lawmakers, teachers at private schools and journalists are covered because the bill considers their work public. Even their spouses are covered.

The main part of the ruling was whether it is constitutional to apply the law to journalists and private school workers since they are not civil servants.

The court ruled that the law does not violate freedom of action and equal rights guaranteed in the constitution by including journalists and private school workers in the scope of “public officials.”

The court also ruled that the definition of “improper solicitation” is not ambiguous based on common sense.

“Some argued that the law will discourage economic growth, but we have seen proof in advanced countries that a country advances when corruption decreases,” the court said. “Based on this situation, the law does not excessively violate basic rights.”

According to the law, a public official will face criminal punishment for receiving money or favors deemed expensive, even if they are not job-related. A gift worth more than 1 million won ($880) or accumulated gifts worth more than 3 million won a year are punishable. In addition, entertainment such as expensive meals, rounds of golf or paid vacations are covered by the law.

The specific enforcement guidelines published by the anticorruption commission in May said accepting a gift worth 50,000 won or receiving more than 100,000 won in cash for a wedding or funeral will be illegal. Being treated to a meal by job-related contacts if it costs more than 30,000 won is also a violation of the law.