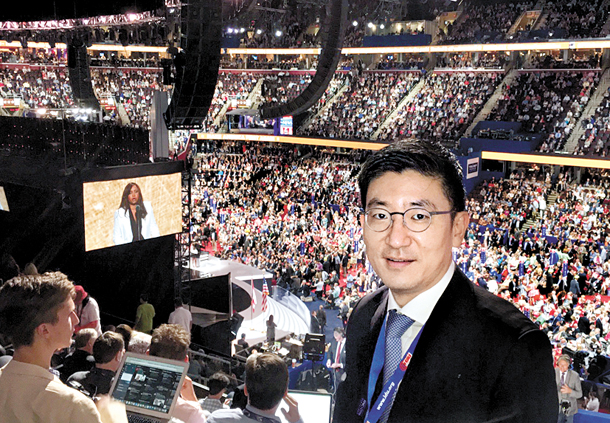 Kim Se-yeon was the only Saenuri representative to attend the U.S. Republican National Convention. [KIM SE-YEON]

The ruling party has missed the opportunity to send a delegation to the Republican National Convention where Donald Trump accepted the presidential nomination of the American conservative party, as it has been swamped for months by fierce factional infighting.

Rep. Kim Se-yeon, a three-term lawmaker representing Geumjeong of Busan, was the only Saenuri representative to attend the convention. Kim attended the event as a vice chairman of the International Democrat Union, an association of 80 conservative parties from around the world. The Saenuri Party sent no official delegate to the convention.

“A national convention is an important pillar of party diplomacy between the two countries,” said Rep. Kim. “It is a very important event. It was regretful that the party failed to give official support.”

In contrast, the Minjoo Party of Korea sent three lawmakers to the Democratic National Convention. Reps. Kim Boo-kyum, Min Byung-doo and Kang Hoon-sik left for Philadelphia on Monday. They planned to listen to the acceptance of Democratic presidential nominee Hillary Clinton and use the experience in planning the strategy for next year’s presidential election.

“I want to feel the sentiment of the supporters who experienced the Sanders phenomenon and the Trump phenomenon,” said Rep. Kim. “I also want to hear the next American leaders’ thoughts regarding the planned deployment of the Terminal High Altitude Area Defense system.”

An American political party national convention is often considered an arena of parliamentary diplomacy where politicians from around the world build networks. Over the past decade, the ruling and opposition parties of Korea have sent delegations to the Republican and Democratic conventions.

“The registration period to observe the convention was when Rep. Won Yoo-chul stepped down from the floor leadership, while the tenure of the newly elected successor, Rep. Chung Jin-suk, did not yet begin,” a Saenuri official said. “Because there was no decision-maker, we could not secure the budget and recruit the delegates.”

“Parliamentary diplomacy is an important channel that complements the Foreign Ministry for jobs that cannot be done through an official route,” said Rep. Lee Hye-hoon, who attended the Democratic National Convention in 2008. “And a national convention in the United States is the most important event in parliamentary diplomacy. It is unfortunate that the Saenuri Party missed this opportunity.”