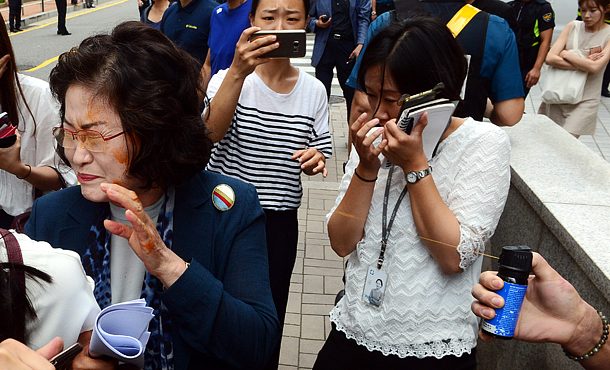 Kim Tae-hyeon, left, chairwoman of the newly launched foundation to support comfort women victims, is sprayed on the face with red pepper by an unidentified man as she left the building after a press conference in central Seoul. [NEWSIS]

A Tokyo-funded foundation to support Korean victims of Japanese wartime military sexual slavery, a key feature of the breakthrough deal between the two countries to resolve the issue exactly seven months ago, was launched in Seoul on Thursday.

But the newly established Reconciliation and Healing Foundation─considered a crucial part of the implementation of the Dec. 28 agreement─also felt a backlash and its chief was physically attacked with pepper spray in Seoul.

Kim Tae-hyeon, a professor emeritus of social welfare at Sungshin Women’s University, was named head of the foundation and emphasized her mission to help heal the wounds of the victims of the Japanese Imperial Army’s forced recruitment of young women into sexual slavery before and during World War II, who are euphemistically referred to as comfort women.

“The goal of this foundation is to heal the wounds and recover the dignity of the victims,” said Kim at a press conference after the foundation’s first board meeting in it new office in Sunhwa-dong, central Seoul. 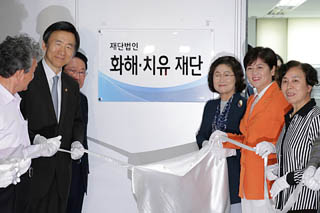 Korean officials launch the Reconciliation and Healing Foundation in a ribbon-cutting ceremony on Thursday. [NEWSIS]

Kim added that the 1 billion yen($9.55 billion) promised by the Japanese government in the agreement will go to these survivors and “cannot be used for anything other than that.”

Last Dec. 28, Korea and Japan’s foreign ministries struck a deal to resolve the comfort women issue, which has been a longtime thorn in their bilateral relations. The deal included an apology from the Japanese prime minister and a plan to establish a fund for the victims, using 1 billion yen to be taken from Japan’s state budget.

The two countries also agreed that the settlement is “final and irreversible,” as long as Japan faithfully follows through with it.

“In order to find out what the victims hoped for, we met with each person one by one,” said Kim. “Maybe they appreciated my sincerity, but they were more welcoming than expected and supported the foundation. And with the exception of a few victims, they said they will take part in the foundation when it is launched. And I believe they will walk the same path someday.

“It is important to resolve their grievances while they are still alive,” Kim said. Many of the victims are elderly and in poor health.

The board of the foundation is comprised of 10 members, mostly members of the preparatory committee. It can grow in size in the future.

In response to a question over whether the Japanese government’s financing of the fund is dependent on Seoul’s removal of a bronze comfort women statue in front of the Japanese Embassy in Seoul, Kim said the two issues “were completely unrelated to each other.”

The foundation plans to use the fund for projects that will benefit the victims directly rather than more symbolic gestures such as establishing a memorial or a scholarship.

The inter-governmental deal has been rejected by some comfort women victims and civic organizations supporting their cause, who demanded that Japan take concrete legal responsibility for the violation of the woman’s human rights.

A group of some two dozen university students staged a sit-in in front of the press conference Thursday demanding the scrapping of the agreement and the dissolving of the foundation. They clashed with police who tried to remove them.

As Kim left the building after the press conference, an unidentified man thought to be in his 20s sprayed Kim’s face with a red pepper spray. She was immediately brought to a hospital.

Civic organizations including the Korean Council for the Women Drafted for Military Sexual Slavery by Japan also protested the agreement on the same day.

On Monday, Korean Minister of Foreign Affairs Yun Byung-se held bilateral talks with his Japanese counterpart Fumio Kishida on the sidelines of an Asean regional forum in Laos, where the two called the bilateral agreement last December “a turning point” in bilateral relations.

This was their first bilateral talks since this agreement was struck.

“Through the launching of the foundation, we plan to carry out projects to heal the wounds in the hearts of all victims of the Japanese military’s sexual slavery and restore their dignity,” said Cho June-hyuck, spokesman of the Korean Ministry of Foreign Affairs, in a briefing on Thursday.