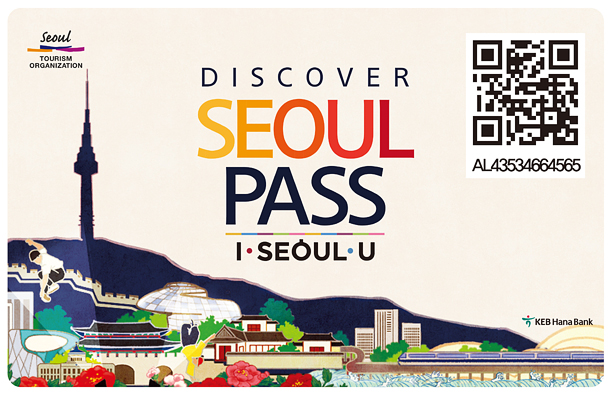 Starting today, tourists will be able to buy a city pass that will instantly open doors to 16 of Seoul’s paid tourist attractions for 24 hours, the Seoul Metropolitan Government announced Thursday.

The Discover Seoul Pass, which costs 39,900 won ($35.50) and is sold at KEB Hana Bank branches and CU convenience stores at Incheon International Airport, as well as at the Myeongdong Tourist Information Center and KEB Hana Bank Hongik University Station Branch, can also be used as a transportation card for buses, subways and taxis throughout the city when charged with cash at subway stations and convenience stores.

The pass opens doors to the following 16 attractions in Seoul, chosen by the developers after careful analysis of TripAdvisor reviews: the four traditional palaces in Seoul, namely the Gyeongbok, Changdeok, Changgyeong and Deoksu palaces; historical sites like Jongmyo Shrine, a Unesco World Heritage site, and Seodaemun Prison History Museum; art galleries and other museums including Leeum, Samsung Museum of Art, National Museum of Modern and Contemporary Art Seoul and Museum Kimchikan; N Seoul Tower Observatory; and K-pop, K-drama and other entertainment centers like the MBC World, K-pop hologram concert hall K-Live, Seoul Trick Eye Museum, Grevin Seoul Museum, Alive Museum and Figure Museum W. Altogether, the adult rate entrance fees to these attractions cost 152,000 won. With the one-day pass, tourists technically gain more than a 70-percent discount if they visit all the designated attractions. “While it may be difficult to visit all 16 sites in 24 hours,” said Cho Sung-ho, an official in the Tourism Policy Division of the city government, “visiting four to five sites will still save a lot of money compared to paying entrance fees directly.”

The pass is only open to foreign citizens, who may be asked to present their passports upon purchase.