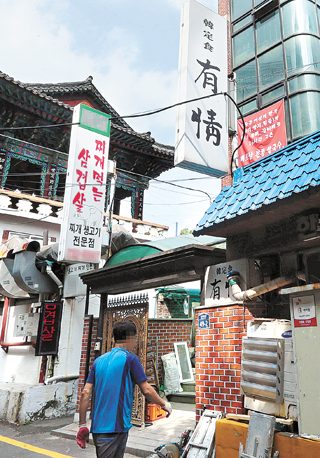 Yoojung, a Korean restaurant in Jongno District, central Seoul, decided to close down earlier this month, before a new antigraft law goes into effect. [SHIN IN-SEOP]

The most worried businesses are Korean restaurants offering prix fixes, where multiple Korean dishes are served in courses, which are popular venues for corporate entertaining. Many such restaurants are in Jongno District, central Seoul, home to many corporate offices and public institutions.

When government ministries and agencies moved to Sejong City, Korean restaurants in the area were hit hard. The new graft law, which takes effect Sept. 28, 2016, will put a further strain on their businesses.

Yoojeong is a Korean prix fixe restaurant located in Susong-dong, central Seoul, with 60 years of history. The restaurant sells lunch courses for 30,000 won and dinner courses for over 50,000 won. The place is a favorite of high government officials and former presidents including Roh Tae-woo and Kim Young-sam.

Yoojeong closed earlier this month. The decision was largely due to the massive migration of civil servants to Sejong City and concerns about the possible effects of the so-called Kim Young-ran anti-graft law.

“Our regular customers were high government officials, journalists and company employees but once the Kim Young-ran law takes effect, we’ll lose all the customers,” said Sohn Jeong-ah, the 68-year-old CEO of the restaurant, who inherited it from her aunt 40 years ago. “I decided to give up operations of the restaurant in fear I might not be able to pay my workers.”

A Vietnamese rice noodle restaurant will be replacing Yoojeong next month. “Noodles cost around 10,000 won and that business may have a better chance,” Sohn said. “The market around this street will be filled with more average-priced restaurants, not upscale Korean prix fixe places.”

Korean restaurant Midang is in the same boat. “A decent dinner course menu costs more than 100,000 won in our restaurant and high government officials kept our business going,” said Kim Kwang-hun, 53-year-old operator of the restaurant in Sinmunno, Jongno District, central Seoul. “But if these customers stop visiting after the antitrust law, I’m seriously considering whether I would have to close.”

Some restaurants are considering replacing course menus with cheaper options and lowering the overall price tag. But rents, labor and utility costs won’t go down even if the menu prices do.

“The cheapest prix fixe at our restaurant costs 38,000 won, which means if either of the customers pay the whole bill, it will be against the law,” said Kim, a 46-year-old who operates a Korean restaurant near Gwanghwamun, central Seoul. “I’m working on developing a 29,000 won set menu.”

“I have to heed the Kim Young-ran law but considering nearly 80 percent of our customer base is comprised of high government officials and company executives, I’m worried that our customers will be disappointed on our food,” Kim added.

“Korea prix fixe is the nation’s traditional food culture that requires complicated cooking processes and good ingredients,” said 54-year-old Park, operator of a 40 year old Korean food restaurant in Ikseon-dong, central Seoul. “Trying to lower the price of the menus might turn the prix fixe into cheap Korean food.” That could lead to stagnation in Korea’s food scene.

“If Korean course menu restaurants start closing down,” warns Park, “masters of Korean foods may gradually be reduced in number, which may retard the development of Korean food culture.”