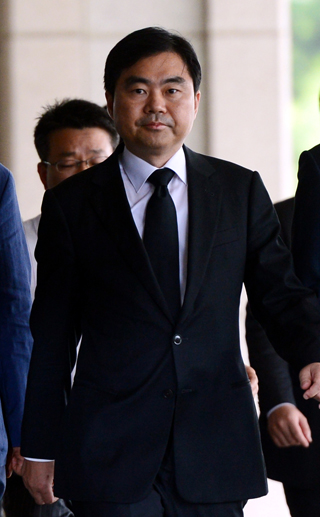 Jin was detained last week. He is the first director-level official in the 68-year history of modern Korea to be detained.

Kim was indicted for allegedly offering bribes to Jin.

According to prosecutors, Jin received 425 million won ($378,282) from Kim in 2005, and bought unlisted Nexon shares with the money. A year later, Jin sold them for 1 billion won, and with that, bought shares of Nexon Japan. He sold those last year for some 12 billion won.

Without having spent a cent of his own money, Jin raked in some 12 billion won in profit.

Since the Government Public Ethics Committee started questioning Jin about his sudden increase in wealth nearly four months ago, Jin was found to have lied many times.

The committee claimed Jin’s previous work enabled him to gain inside information about Nexon and build social networks there. Kim Jung-ju, owner of NXC Corporation, the holding company of Nexon, was pointed out as a possible accomplice given the fact he and Jin have been close ever since they went to Seoul National University together.

Jin came clean in mid-July, saying Kim had given him the money, not lent it.

Jin drove a Hyundai Genesis leased by Nexon Holdings, later named NXC Corporation. Jin drove the car from 2008 to 2009 and then allegedly kept it.

From 2005 to 2014, Jin also received from Kim some 50 million won over the course of 11 transactions to pay for family vacation trips, according to prosecutors.

There is a separate probe involving Hanjin Group and Jin’s brother-in-law, who founded a cleaning company in 2010, which has been providing services to Korean Air until recently. Authorities assume Jin pressured Hanjin Group to sign a business deal with his relative as a favor after the company won a tax evasion case between 2009 and 2010.

The Supreme Prosecutors’ Office announced Friday its decision to fire Jin from his senior prosecutor post. The decision was reportedly agreed upon by a unanimous vote at its Inspection Headquarters on Tuesday.

From the date of his dismissal, Jin no longer receives his salary as senior prosecutor, and his pension will be reduced by 25 percent.

He will be banned from opening a lawyer’s office for the next three years.

Kim Jung-ju announced Friday his decision to step down from the board of Nexon.