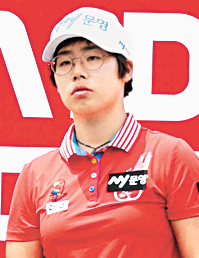 Three bogeys in the middle of the round could have cost Cho Jeong-min her second career win at the KLPGA. After all, losing three shots within five holes may be critical for the overnight leader who was ahead by only two strokes. But Cho had the grit and wit like no one else, not to mention her signature boldness that has often paid off when she has been in a pinch. At the end of the day, Cho emerged as the winner of the inaugural Caido-MBC Plus Ladies Open Presented by LIS on Sunday, at the Inter-Burgo Country Club, Daegu.

Cho finished the first round of the tournament on Friday tied at eighth but quickly climbed the leaderboard to finish first after the second round, going the entire day on Saturday without a single bogey to finish 10-under.

After the seven birdies on Saturday, she added another birdie to her belt at the onset of the third round on Sunday, improving her record to 11-under par.

Then began her slide, starting from the par-4 sixth hole where she recorded her first bogey in 27 holes. One bogey would have been nothing to worry about, of course, but Cho made things worse for herself by bogeying the eighth and 11th hole, yielding the lead to Hong Ran and Jeong Seul-gi, who were tied at second before Cho gave them the lead. But Cho remembered what Ko Jin-young said the night before; stay cool.

The 21-year-old took the advice from Ko and didn’t flinch even after her third bogey. Playing amid deep sighs from the gallery, Cho went and climbed back to the lead, tying for first along with Hong and Jeong by taking birdies from the 13th and 15th holes.

With three holes remaining in the tournament, it would have been safe for Cho to try to save par from the 16th to 18th holes to force a three-way playoff against Hong and Jeong. After landing her tee-shot at the left edge of the fairway, she went and parred the 16th hole, not taking an unnecessary risk.

However, the 17th hole proved to be far more than just a second-to-last hole of the tournament as Cho went for a birdie to take back the lead that she lost earlier in the day.

When she nailed the birdie putt that put her back on top, the gallery, many being Cho’s fans from her native hometown of Daegu, went wild.

At the final hole, while Hong and Jeong waited in the clubhouse for the result after finishing early, Cho had only par putt to go before sealing her victory.

Although the distance from the pin to her ball was only about a yard away, which would have been an easy shot if the victory was not at stake, tension was high as Cho took her what could be the final putt of the day.

Despite the nervousness in the air, Cho putted the ball calmly and sent it into the hole to claim her second career trophy.

“I think I made up for my mistakes toward the end of the match,” Cho said. “I would like to express my gratitude to all the local fans here who came out to support me. It is great to have people from my hometown to support me.”