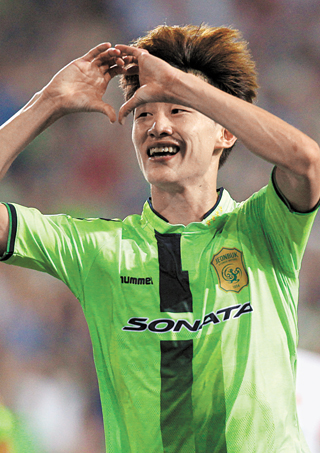 In the latest K-League match on Saturday at its home Jeonju World Cup Stadium in North Jeolla, Jeonbuk piled in three goals in the second half alone to claim a 3-0 victory over Gwangju FC.

The match against Gwangju received much attention and it marked the return of Lee Dong-gook, K-League’s all-time leader in scoring with 187 goals and the indisputable ace of the club, from the hamstring injury that sidelined him for almost a month. However, Lee seemed less than light on his feet, not making a notable performance, taking only one shot throughout the entire match.

Other players from Jeonbuk more than made up for Lee’s struggle. Midfielder Lee Jae-sung, a fourth-year pro in the K-League, led the way for Jeonbuk with a goal and an assist while two Brazilians, Lopes Pereira Ricardo and Rodrigues Pereira Leonardo, each added a goal to lift Jeonbuk over Gwangju.

Lee scored the opening goal in the 46th minute when he received a pass from the right side of the penalty box. He aimed at the right corner of Gwangju’s goalpost and netted the ball in past Gwangju’s goalie Choe Bong-jin.

Soon after his goal, Lee went and assisted Leonardo’s goal in the 70th minute, a goal that would extend Jeonbuk’s lead by three and thus seal its victory. Lee came out of the game as the man of the match.

Jeonbuk’s season record after Saturday stands at 14 wins and nine draws. The team is especially strong at home, where it has claimed 10 wins and only one draw, compared to away games during which it claimed four wins and eight draws. Jeonbuk’s last league loss was in the final round of the last season when the club was defeated by Suwon Samsung Bluewings 2-1.

As of Saturday, Jeonbuk now holds records in three other categories, besides the undefeated streak. Jeonbuk set the winning streak record when it claimed nine straight wins in 2014. It also set a record in scoring sprees when it scored in 26 consecutive games in 2013. In 2014, while on its record-setting nine-game winning streak, Jeonbuk claimed another record by conceding no goals in eight straight games.

“Setting a new record at home means a lot,” said Choi Kang-hee, manager of Jeonbuk Hyundai Motors. “We must give credit to our fans’ support for the accomplishment. Regarding the record, I felt the pressure but I wasn’t going to emphasize it to the players. I think they were already burdened by it [without me telling them about it]. I know they felt a heavy burden but they endured through. It has been a tough season for our team but players are handling it very well. I must commend their effort.”

Although its chance for the first Korean FA Cup title in 11 years has slipped out of its hands after a crushing 3-2 defeat by Bucheon FC 1995 on July 13, Jeonbuk now has its eyes on claiming its third straight K-League Classic title as well as its first Asian Champions League title in a decade.

Elsewhere in Korean professional sports, the SK Wyverns of the Korea Baseball Organization has the record for undefeated games in baseball, with 22, while Ulsan Mobis Phoebus of the Korean Basketball League went 17 games without suffering a loss in 2013.

Jeonbuk Hyundai Motors will host Suwon FC Wednesday. As Jeonbuk plays for the home crowd once more, it is expected that the club is likely to add another victory under its belt, breaking the record once more and going 24 games without a loss.

With only 15 games remaining in the league now, K-Leauge fans cannot help but wonder if Jeonbuk will make history once more at the end of the season by going through the entire season without a single loss.