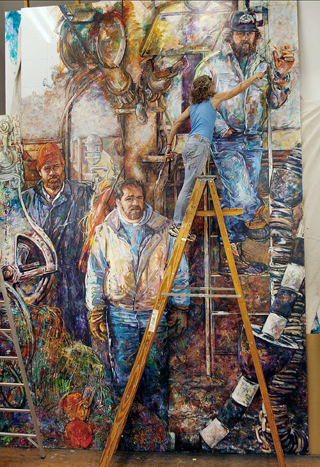 Ellen Griesedieck works on a portion of a giant mural in her studio in Sharon, Connecticut. [AP/NEWSIS]

WINSTED, Conn. - A Connecticut artist’s dream to honor American workers with a 5-storey-high mural that ties in contributions from thousands of children across the country is moving closer to reality.

Ellen Griesedieck and her American Mural Project were awarded a $1 million matching state grant to help transform two old mill buildings in Winsted, one of Connecticut’s first mill towns, into a visitors center and gallery space to house a 3-D mural 120-feet-long and 10-feet-wide. Bids are due in August and construction could take about a year.

Once completed, it’s expected to be the largest indoor collaborative artwork in the world.

“It’s not some mural on a wall. This is going to be a national monument,” said Griesedieck, imagining how the project will also include artist workshop space, gardens, an amphitheater and educational programs.

Since Griesedieck envisioned the project 15 years ago, she has held workshops with 10,000 students across the country and gotten support from both little- and well-known names, including personal friend and actor Paul Newman, Mohammad Ali and tennis pro Andre Agassi.

Multiple images and symbols of the American workforce - from auto plant workers to NASA scientists - will cover the mural. Artwork from the student workshops will be incorporated into the giant painting.

Griesedieck hopes the mural project will not only remind Americans of the work and ingenuity that built the country and continues to thrive, but also inspire young people about their future potential in life.

“The same thing that built this country from nothing,” she said, “is still present in all of us.”

The large-scale piece, she hopes, will cultivate a better appreciate for the skill and craftsmanship of a cattle rancher, marble quarry worker, or a newspaper printing press operator - all jobs she shadowed over the years, armed with her camera.

Griesedieck likes to compare the project’s potential to the Massachusetts Museum of Contemporary Art. The Mass MoCA is one of the largest visual and performing arts center in the U.S. It opened in a converted factory complex in 1999 and now draws artists and visitors from around the world. It’s on track to become the country’s largest contemporary arts museum.

“You need only look at Mass MoCA and see what they did and how people laughed at them,” said Griesedieck, who is well-aware the challenge grant supported by Democratic Gov. Dannel P. Malloy has attracted some criticism as the state contends with a budget deficit.

“We need a mural when there are people who can’t find a job?” JR Romano, chairman of the Connecticut Republicans, recently wondered.

But Republican legislators who represent Winsted see the project as a potential boon to the local economy. Republican Sen. Clark Chapin, of New Milford, predicted it will bring countless visitors to the region, and state Rep. Jay Case, a Winchester Republican, said it will complement the already thriving arts community in northwest Connecticut.

And Griesedieck reminds skeptics of the immediate boon to workers that a mural honoring American workers will be. Once securing the grant from the Connecticut State Bond Commission, raising $1.4 million in private matching contributions and putting out bids, the excitement started to build.