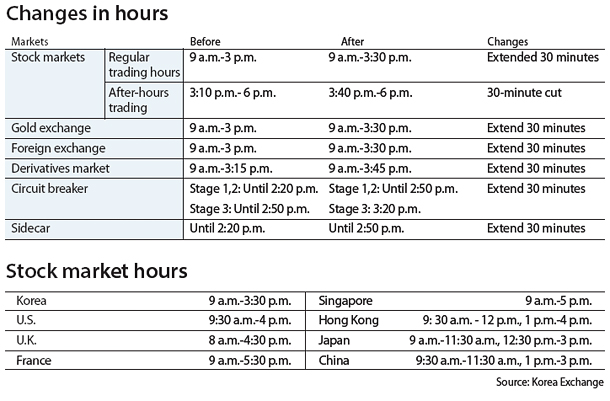 Korea’s stock and foreign exchange markets and gold exchange will operate 30 minutes longer, until 3:30 p.m. starting today, in a move aimed at boosting equity and other financial transactions.

The trading hour extension is the first major change in 16 years since Korea Exchange (KRX), the stock market operator, eliminated a one-hour lunch break. The market opens at 9 a.m.

The closing hours of the derivative markets will change from 3:15 p.m. to 3:45 p.m. But the extended closing hours will shorten the after-hours session on stock exchanges as the opening time for the session will push back to 3:40 p.m. from 3:10 p.m.

The KRX expects that the extended hours will increase daily trading volume 3 to 8 percent or raise daily transactions by up to 680 billion won ($611.4 million), an estimation that divides market analysts.

“With the 30-minute extension, daily trading transactions on Kopsi will increase by 4.1 percent and Kosdaq 7.1 percent,” said Seo Bo-ik, a senior analyst at Eugene Investment & Securities.

Analysts forecast that securities companies will benefit from the measure.

“When we assume the volume of average daily stock trading is 8 trillion won, the brokerage fees for executing transactions will increase by 178 billion won annually,” the analyst said on Sunday, adding that the change will have a positive impact on the shares of brokerage houses.

“While the extended hours will allow investors to reflect market information from China’s stock markets but the impact won’t be as great as the 3 to 8 percent increase of daily trading,” said Kong Won-bae, a researcher at Hyundai Securities.

“The increase will be limited to around 3 percent,” Kong said.

The early closing time often hampered investors from factoring in market circumstances from those countries which are considered key countries deeply tied with the Korean economy.

Other advanced markets such as the United States, United Kingdom and Germany all close at or past 4 p.m.

Korea saw the immediate increase in daily trading after the KRX increased operating hours in 1998 and 2000.

But Kong, the researcher, says things are different now.

“At the time, an online trading system was introduced and brokerage fees had gone down,” he said, “So, it is hard to say that the changed time was a sole contributor to the rise in trading.”