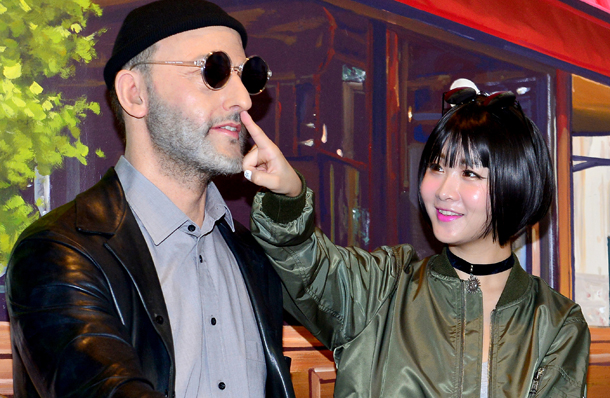 A model poses next to a wax statue of Leon from the 1994 movie “Leon.” [GREVIN MUSEUM]

The Grevin Museum (Musee Grevin), which features waxwork figures of famous and historical people, celebrated its first anniversary in Seoul on Friday.

The Seoul branch held a press conference at the museum in Euljiro, central Seoul, to give an update after their first year of business and announce what the museum plans to do to attract more visitors in the future.

The CEO Kim Yong-kwan and the general manager Beatrice Cristofari were present.

“We have had a thousand visitors on average day,” said Kim, who added, “But we are expecting to increase that figure up to 1,500.”

Kim presented specific plans as to how the museum will appeal to more people.

“First of all, we are planning to make additional wax figures to celebrate the first anniversary. We believe that representing an iconic figure is of the biggest importance,” Kim said, explaining the reason the museum decided to feature the entertainer Yoo Jae-suk in wax.

The figure is expected to be on display early next year.

Also, in order to help children achieve their dreams, the museum will also frequently host special programs where renowned stars will deliver lectures.

The museum made its such first attempt on July 22 by inviting Park Chan-ho, a former Major League Baseball pitcher who retired after a 19-year-old career.

Around 40 elementary students were guests. The children were chosen based on the comments they wrote about their dreams on the museum’s Facebook page.

To add more French atmosphere to the museum, administrators designed a special space and named it “Oh! la la Paris,” where representations of Parisian landmarks such as Montmartre and the River Seine decorate the walls. A wax figure of the character Leon from the 1994 movie, “Leon,” directed by French filmmaker Luc Besson, is also there to add a little more French flair.

“Grevin Museum will make more efforts to provide visitors with more diverse content, including the exhibition, educational and game experiences, in order to become a landmark of Seoul,” said Kim.

The Grevin Museum, also known as the Musee Grevin, was first established in 1882 in Paris. It has several branches and Korea became the first country in Asia and the fourth in the world to open a Grevin branch last year.