Prolific translator of Korean poetry talks about getting it right

Prolific translator of Korean poetry talks about getting it right 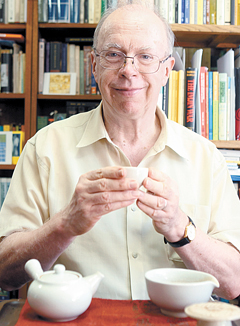 Poetry often consists of just a few lines, leaving space for the reader to interpret. But the allusion inherent in the form forces translators to walk a tightrope between maintaining a poem’s originality while making it accessible to readers.

“Many poets write in a more or less obscure, illogical or allusive style,” said An Son-jae, a U.K.-based translator who specializes in translating Korean poetry.

An, who also goes by Brother Anthony, is a professor emeritus at Sogang University who has spent his life studying English literature. Since his first translation Ku Sang's poetry in 1990, he has translated 35 books of poetry so far, including work by Ko Un, Kim Kwang-kyu and Kim Yeong-nang.

The Korea JoongAng Daily sat with An to hear more about his translation process, and the way he stays faithful to the poets' original intentions.

Q. What do you consider important when translating poetry?

A. It is often hard for me to understand what the original text is saying, both because my Korean skills are limited, and because the Korean language’s grammar is very unlike English. A very strictly “accurate” translation of a Korean poem will not automatically yield a good English poem, although the translator has a duty to present English readers with a text that remains “faithful” to the essence of the original. This is because the translated poem will still be presented as being [written by] the Korean poet. A translated poem should be as allusive and difficult as the original.

Translating poetry may inevitably involve the active interpretation of the translator. How do you find balance between the translated work and the original?

Because I know that I often cannot understand Korean, I usually seek out a co-translator who is a native speaker of Korean, familiar with literary texts, and with a very high level of English reading ability.

I prepare a first draft of a translation, then invite the co-translator to tell me where I have misunderstood the Korean, or failed to transmit the essential message. Then we can work together revising. Sometimes, a Korean co-translator prepares an initial, more-or-less rough but “faithful” English translation that I am then able to refer to while I prepare a translation of the Korean original.