Watching the road - and movies, too

Watching the road - and movies, too

Imagine being able to drive without ever having to look down at the dashboard or a GPS navigator.

So-called heads-up displays that project information in front of the driver have long been a mainstay of sci-fi movies and video games, and in the past few years, they have also been offered as a feature in many newly-released cars, displaying information such as speed and fuel level right on the windshield itself.

But auto parts makers are going a step further and developing a whole array of so-called smart windows that not only display basic status indicators but can also project maps and images and change their tint depending on light conditions.

Germany’s Continental, for instance, the global leader in automobile parts, unveiled a smart car window at the Consumer Electronics Show in Las Vegas in January. The glass panels can automatically darken to block out sunlight, removing the need for car owners to tint their windows.

“The selective, incremental darkening of the side and rear windows, as well as parts of the windshield, not only offers considerably increased comfort for passengers, but also makes driving safer,” Andreas Wolf, head of the company’s body and security business unit, said in a press release. 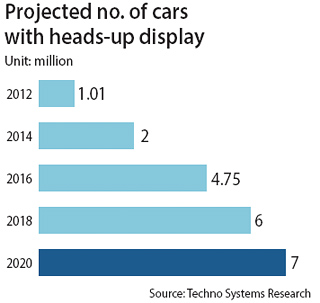 The development of these smart windows is a natural next step from the rudimentary heads-up display technology that has already been incorporated into many automobiles.

Heads-up displays were initially developed for fighter jets so that pilots wouldn’t have to turn away from the view in front of them. Likewise, heads-up displays in cars allow drivers to keep their eyes on the road, as information is shown on the windshield at eye level.

Hyundai Motor’s Genesis EQ900, a luxury model launched last year, includes a heads-up display with improved resolution through the use of light-emitting diodes. The car’s display is set based on the driver’s height.

Many automakers are now pursuing more ambitious projects to provide a wider range of information on heads-up displays. BMW is working on a more advanced display for its BMW 7 Series that can project graphics onto an area 75 percent larger than displays in previous models and in full color.

The heads-up displays in Mercedes-Benz cars show the vehicle’s cruise control situation, while those in Toyota’s fourth-generation Prius display the real-time status of the vehicle’s hybrid engine-motor system. Tesla Motors put many of the dashboard gauges on a separate 15-inch display panel as well as on a heads-up display in its Model 3 car launched in April.

Smart windows are expected to be a core platform of the futuristic “connected car,” in which information technology is incorporated into automobiles to provide an augmented experience for drivers and passengers.

Experts say that in the future, the Internet of Things will be applied to smart glass panels to provide not only information on driving habits and route analysis but also health information such as blood alcohol concentration.

Global marketing research company Techno Systems Research estimates that more than three million cars released in 2015 have a heads-up display. The state-of-the-art technology is expected to expand to budget cars by 2018, increasing the number of equipped vehicles by six million. This trend is also reflected in the Korean market, where there have been 504 patent applications related to automobile heads-up displays.

Experts predict smart windows will be combined with augmented-reality technology in the near future. They expect 3-D map projections to be a key element of heads-up displays to help with avoiding obstacles, changing lanes and GPS navigation. Augmented-reality projections are also expected to help remove blind spots.

Since 2014, Hyundai Motor has been developing a next-generation augmented-reality heads-up display that can show road conditions and information on vehicles that abruptly cut into lanes.

Land Rover is working on a heads-up display which can project the terrain beneath the car that is obscured by the front hood, expanding the driver’s line of vision.

BMW Mini has unveiled augmented-reality glasses that show views captured by cameras mounted on the exterior of cars. The eyewear allows users to see surrounding areas blocked by the car’s frame and doors.

Automakers are hoping heads-up displays can not only enhance the driving experience but also riding as well. At the Beijing Motor Show in April, LeEco, a Chinese IT company, unveiled an all-electric concept car called LeSEE which included a heads-up display in the backseat window that could show movies and other information.

Toyota is working on a similar concept model where backseat windows can become interactive touchscreens that display location details when a passenger taps on a building or landmark seen through the glass, turning the backseat window into an infotainment option.

These futuristic car windows also have the potential to be lighter in weight and more durable than current windows. American glassmaker Corning announced last December that it would supply Ford with its Gorilla Glass, a damage-resistant tempered panel developed for smartphones, to be used in the automaker’s GT supercars.

Motorcycles, too, are being equipped with heads-up displays. Samsung Electronics, the world’s No. 1 smartphone maker, introduced its Smart Windshield in March, a windscreen with a heads-up display that includes information such as speed and fuel level. The product can also be connected to a smartphone to display emails and messages.

“The Smart Windshield concept could also be used to display useful data from applications such as maps or GPS, further enhancing its practical side,” tech magazine Gizmag wrote.

Although the technology shows a lot of promise, it is still nascent, and experts say standards related to safety and functionality are needed.

“Developers need to prepare certification standards and objective evaluation of the technology,” said Kim Kyeong-ho, a researcher at the Electronics and Telecommunications Research Institute. “The market needs an international standard and guideline that domestic companies should follow to improve compatibility with global consumer needs.”