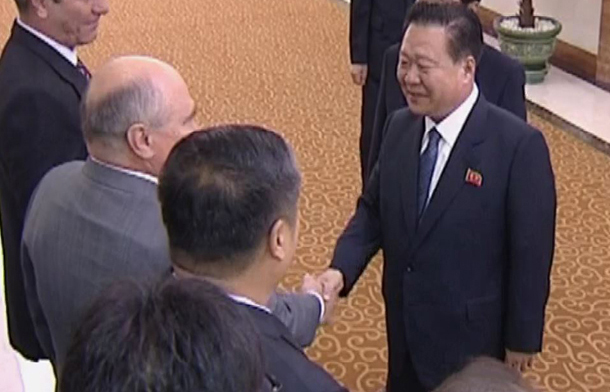 Choe Ryong-hae, vice-chairman of the State Affairs Commission, shakes hands with foreign diplomatic officials in Pyongyang on Saturday on his way to a flight to Beijing en route to Brazil to attend the Summer Olympic Games. [NEWSIS]

The state-run Rodong Sinmun reported Sunday that Choe, vice-chairman of the State Affairs Commission, left the state capital as head of a high-level delegation to attend the opening ceremony of the upcoming Olympic Games in Rio de Janeiro. Choe arrived in Beijing on Saturday and is now staying at the North Korean embassy there with delegation members.

It remains to be seen how long the North Korean delegation will stay in Beijing before embarking on a long trip to Rio.

Choe’s participation in the Rio Games has drawn attention as he is the North’s highest-ranking official ever to attend the Olympic Games.

It is possible for Choe to have meetings with senior Chinese officials to discuss bilateral issues, especially on the matter of Seoul’s decision to deploy the U.S.-made advanced missile defense system by the end of next year, which has drawn strong backlash from both North Korea and China.

Choe could use his time in Beijing as an opportunity to rally support from Beijing for Pyongyang and improve relations between the two traditional allies, which saw their ties strained over the past few years as Pyongyang went ahead with two nuclear tests despite warnings from China, forming a united front against the Terminal High-Altitude Area Defense (Thaad) system.

A testament to his stature within the party, Choe was head of the delegation to China last September to attend Beijing’s military parade celebrating the 70th anniversary of the end of World War II.

Pyongyang’s decision to send him to Brazil is seen as an effort to seek a way out of deepening isolation from the international community, stemming from the UN sanctions imposed in March for its fourth nuclear test in January and a long-range missile test the following month.

“While it is true that North Korea is continuing to raise tensions with its nuclear test and missile launch, Kim Jong-un is pursuing the normalization of the state,” said Kim Yong-ho, professor of politics and international relations at Yonsei University. According to Kim, Pyongyang’s dispatch of Choe to Rio is part of its endeavors to break loose from international sanctions.

Considering the opening ceremony is scheduled for Friday, Choe could stay in Beijing for a few more days to arrange meetings with Chinese officials to sharpen their opposition to the deployment of the Thaad system in South Korea. Or he could visit Cuba, the North’s communist ally, en route to Rio, in efforts to enhance ties. North Korea dispatched 31 athletes to compete at the Olympics in nine sports including the marathon, judo and weightlifting. The Games will run from Aug. 5 through 21.