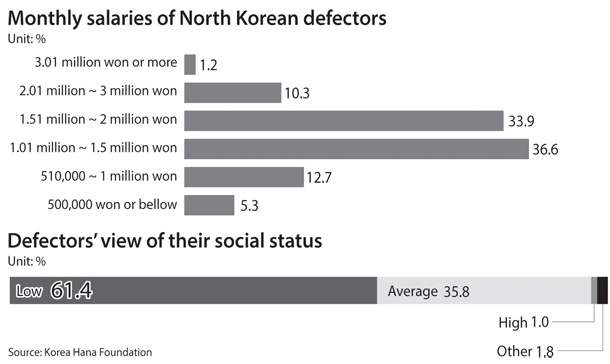 When Ji-eun was 16, she made a trip to see her grandmother that would change her life forever. Having grown up in Pyongyang, the visit to nearby China was her first glimpse of the outside world. The journey eventually carried her all the way to South Korea, where she arrived eight years ago and has been working for the past year at a so-called ticket dabang (coffee shop) serving coffee and keeping her male clients company.

“They take us out for a drive, to a karaoke bar or a motel,” says Ji-eun (not her real name). “That’s when we really make some cash.”

The area where she works, Suji District of Yongin, Gyeonggi, is home to roughly 20 different ticket dabangs including the one Ji-eun works at, making it one of the most densely populated ticket dabang districts in the country. The establishments thrive near public schools and private education institutes, enticing male clients just a block from apartment complexes.

A recent study led by the JoongAng Ilbo found that North Korean defectors work in all but three of these stores. In at least five, the entire staff, including the owner, was from North Korea. Most interviewees claim they entered the business after hearing about it from their close friends.

Among the roughly 30,000 North Korean defectors who have resettled in the South after the 1950-53 Korean War, about 70 percent are females with no high school education, most of whom rely on low-paying manual labor.

When asked about their social status, 61.4 percent said they feel their status is at the bottom of society while only 35.8 percent thought they were about average.

In nearby Yangpyeong County, Gyeonggi, three of the 10 ticket dabangs there are operated by a North Korean defector. Eight of these have hired defectors. Ms. Kim, 44, who escaped the North eight years ago, says she used to work at a factory and earned 1.3 million won each month before gaining a foothold in the ticket dabang industry.

“It just wasn’t enough to send money back to my family in North Korea,” she explains.

Ji-eun, who underwent training in the North to become a singer, says she felt the same.

Upon her arrival here, Ji-eun enrolled in a private singing academy to pursue her dream, only to be told soon afterward that her vocal talent was not good enough for the local industry.

“My teachers used to tell me I was good at singing,” says Ji-eun, “but that my vocals were too different from what’s trending in South Korea nowadays.”

She then began working at a nearby hair salon, where she earned 1.5 million won per month.

But it wasn’t enough. She had a family to feed in the North. At the ticket dabang, life was better because she earned nearly three times what she had made before.

“I work, eat and sleep there. My boss is a defector, too, so everything’s pretty easy.”