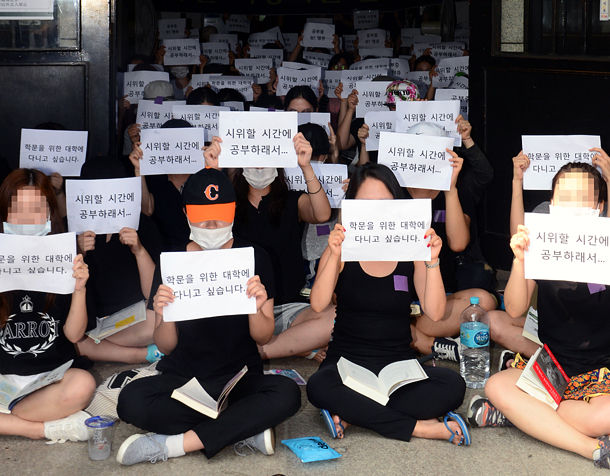 Students of Ewha Womans University stage a sit-in protest on Sunday at the main hall of the school to denounce the school’s plan to establish a college for people who have entered the workforce without a university education. The students have been occupying the building since Thursday. [NEWSIS]

Hundreds of students at Ewha Womans University in Seodaemun District, western Seoul, have been occupying one of the school’s halls for days in a bid to pressure the university to scrap its decision to create a college for non-traditional students.

Some 300 students have participated in the sit-in so far, which began last Thursday in a building housing the president’s office. The school’s board of trustees had officially decided that day to push the plan forward, rejecting voices from the student body that denounced the so-called Future Life College.

A group of five professors and faculty members who joined Thursday’s meeting was locked inside the building when 200 students stormed in to express their defiance, leading local police to dispatch around 1,600 officers Saturday to guide them out.

Around 10 students were physically injured during the altercation. Some were transported to a nearby hospital by ambulance.

The school’s initiative to establish the Future Life College is led by the Ministry of Education, which sought to offer high-quality education to people who started working right after graduating from high school. The plan was to offer opportunities for those who couldn’t afford a college education but felt the need to get one later in their careers.

In May, the ministry accepted universities who were willing to follow through with its effort and promised it would offer government funding to whoever won the open bid. Ewha Womans University, Dongguk University and Changwon National University were announced the final winners last month.

Some students, however, accused the school of having decided the issue unilaterally, without gathering opinions from the student body. Others criticized the school as trying to earn money by “selling diplomas,” likening the school to a corporate institution.

The school has claimed that other universities are running similar colleges, as well, and that offering educational opportunities for social outcasts coincides with the “social flow.”

On Saturday at 4 p.m., after the police ebbed out of the school’s main hall, scores of students were waiting for President Choi Kyung-hee to make her first appearance in front of them since the start of the sit-in, an effort that eventually went in vain. Temperatures exceeded 32 degrees Celsius (90 degrees Fahrenheit). Only two electronic fans were whirling in the hallway. Several students passed around snacks and cold drinks, encouraging each other to successfully fight the heat.

On a small note attached to one of the snacks, a message read: “The owners of our school are its students.” Another read, “Schools shouldn’t be profit-oriented.”

“What makes me really mad,” a student said under anonymity, fearing retaliation from the school, “is that the university is off searching for money and refuses to hear from their own students.” A 25-year-old student studying German language and literature, surnamed Yoon, said, “I don’t understand why people who already have a professional job need a college diploma. The project is based on the premise that having a degree can elevate one’s social status.”