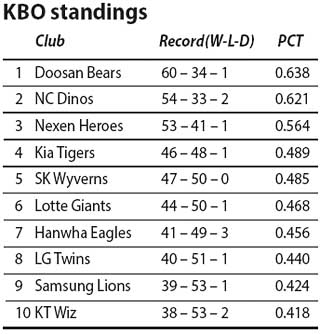 The Doosan Bears had much to celebrate on Sunday, as the team reached key season benchmarks in both number of victories and spectators.

After defeating the Hanwha Eagles 10-4 at home in Jamsil, southern Seoul, the Bears became the first club this season out of the 10 teams in the Korea Baseball Organization (KBO) to claim 60 wins.

The Bears had fallen into a four-game skid after their 59th win, but it did not take more than a week for the reigning champions to come out of the pit and finally reach their season record.

Based on historical KBO stats, the first team to claim 60 wins in a season has a 76 percent likelihood of topping the regular season and a 60 percent chance of winning the Korean Series. Now that the Bears have reached that mark, the odds are in their favor.

Along with their win, the Bears became the first among KBO clubs this season to host more than 800,000 people at their home games. As of Sunday, 804,667 spectators have attended 48 Bears games at Jamsil Baseball Stadium.

Starting pitcher Michael Bowden was the key behind the Bears’ win on Sunday. For seven innings, Bowden tossed 105 balls and gave out only six hits and three runs to nab his 12th win this season.

“It must have been physically demanding for Bowden to start twice in a week, but he brought us the momentum,” Bears manager Kim Tae-hyeong said. “Kim Jae-hwan and Park Kun-woo did a remarkable job in fielding to help out Bowden.”

Bowden is now one game away from tying the winningest pitcher in the KBO this year. His teammate Dustin Nippert holds the season record so far with 13.

After the win, the American pitcher said that his goal is to play in as many innings as possible this season. Bowden was rather humble about his late run, describing the success in the second half of the season as a combined effort with his teammates.

“We have reached the 60th win mark, but the squad is worn out from the games in July,” Bears manager Kim said. “We will get some rest to play great games in August as well.”

The Bears are leading the league offensively as well as defensively. In pitching, the Bears as a team has a 4.46 earned run average, the lowest among KBO clubs, and 25 saves, the most in the league.

In batting, the Bears are leading the league, hitting .298 with 110 home runs and 548 runs batted in, almost as much as .010 ahead of the NC Dinos in batting average, who are ranked second after the Bears. 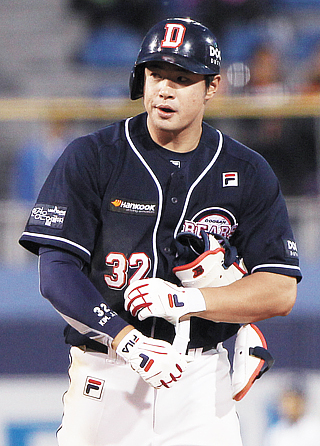 With the Doosan Bears notching their 60th season win on Sunday, there was perhaps no teammate celebrating more than infielder Kim Jae-hwan, whose swift plays in defense that night helped the Bears clinch the game.

Kim batted fourth and played left field in the game against the Hanwha Eagles, going 3-for-5 with three runs batted in and one run scored. On top of his notable performance in offense, the 28-year-old infielder provided significant aid to Bears starting pitcher Michael Bowden.

At the top of the first inning, the Eagles’ leadoff batter, Jeong Keun-woo, cranked what could have been a double to the left field. But Kim was quick on his feet and caught the ball to take out Jeong, relieving some pressure off Bowden, who could have been devastated if he gave out a double at the very beginning of the game.

Kim then went to the plate at the bottom of the first. With two outs and one runner on base, Kim smacked a double and reached home one play later with a clutch hit from Nick Evans.

Many of Kim’s critics often say his field plays are very unstable, but he proved them wrong on Sunday. Aside from his quick catch in the first inning, Kim also caught a long hit from the Eagles’ Lee Yong-kyu in the fourth inning, saving the day for Bowden once again.