An urgent task at hand

An urgent task at hand 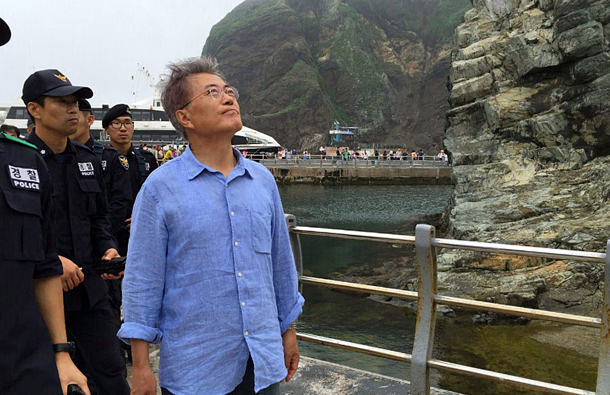 Moon Jae-in, former chairman of the Minjoo Party of Korea, lands on the Dokdo islets on July 25. [NEWSIS]

Former Minjoo Party chief Moon Jae-in made a two-day trip to the Dokdo islets last week. He was the first heavyweight politician to visit Dokdo since former president Lee Myung-bak. I personally don’t understand what was on his mind when he visited the islets. But I hope he was aware of the black comedy that the Minjoo Party had created over them.

On Aug. 10, 2012, Lee Myung-bak visited Dokdo. The Democratic Party, the predecessor of the Minjoo, said the president was out of his mind and would break Korea-Japan relations. But in May 2011, the Democratic Party urged Lee to visit Dokdo. Russian President Dmitri Medvedev had visited four islands in the Kuril Islands that were disputed with Japan. Democratic Party spokesman Hong Young-pyo said Koreans were wondering why their president did not visit Dokdo. A year later, Lee visited the islets just as the Democratic party urged. But the opposition party raised concerns over Korea-Japan relations. If the party was worried about Japan, it should have discouraged Moon, a presidential hopeful, from visiting Dokdo. But the Minjoo Party publicized the visit by releasing photos of Moon there.

When it comes to Japan-related issues, the Minjoo Party seems to contradict itself often. They seem to think, “The Saenuri Party is pro-Japanese, and therefore, anti-national for doing anything associated with Japan. The Minjoo Party is the legitimate successor of the independence movement and can deal with Japan properly. When we visit Dokdo, it is patriotic. If the Saenuri Party visits Dokdo, it is treacherous.”

But it is just as crooked an idea as calling the Minjoo pro-Pyongyang and claiming that only the Saenuri Party can handle North Korea.

The Minjoo Party needs to stop arguing over Japan. In fact, Kim Dae-joong and Roh Moo-hyun worked hard to maintain a close relationship with Japan. Kim Dae-joong opened doors to Japanese culture, and now we can see Japanese signs on the streets of Seoul.

Roh Moo-hyun was the first to pursue a free trade agreement with Japan and proposed to Japan that the East Sea ought to be renamed “the Sea of Peace.” They made these decisions for the interests of Korea.

As long as the Minjoo Party ignores history and continues to pursue emotional diplomacy, citizens won’t believe Moon’s claims that the Minjoo Party fights for the security and welfare of the people. It is actually Kim Jong-in who showed the possibility that the Minjoo Party is the real party of security. In addition to North Korea’s collapse, he argued that the shutdown of the Kaesong Industrial Complex and the deployment of the Terminal High Altitude Area Defense antimissile system were inevitable. And his views made the citizens give the party a second look. To the Minjoo Party members opposing the Thaad deployment, Kim asked if they were opposed because of China’s response, North Korea’s reaction, the safety of Seongju residents or the political gains by opposing the deployment. He was making a good point, and no one answered, probably because of political considerations. Kim exposed the intentions of Minjoo Party members.

Some intellectuals say that it is fortunate that Kim Jong-in is with the major opposition party.

However, Kim Jong-in’s term will end next month, and the Minjoo Party will go back to its old self. The candidates for the party leadership oppose Thaad deployment, as they want to garner support from the pro-Roh faction. If the Minjoo Party goes back to what “the Democratic Party” used to be, it will not be easy for them to come back to power, no matter how poorly the Saenuri Party performs.

For the Minjoo Party to seize power, Kim Jong-in needs to continue in his role. The party cannot appeal to the people by offering only Moon Jae-in as the next presidential candidate. Only Kim Jong-in can be expected to bring down Ahn Cheol-soo, the archenemy of the Minjoo Party. Kim is the one who exposed how amateurish Ahn Cheol-soo is about security regarding Thaad.

Kim Jong-in had served five terms in the National Assembly as a proportional representative and left politics once. His reemergence is not normal. It is a tragedy of Korean politics that the septuagenarian was brought in to head the major opposition party. However, if Kim contributes to correcting the misdirected foreign policy and uncompromising stance of Moon Jae-in and the pro-Roh faction, future generations will remember him as a strategist who saved Korean politics from crisis.