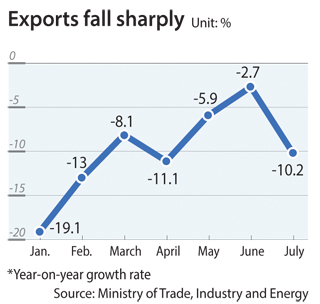 Exports last month not only continued the longest year-on-year decline but also suffered a double-digit fall. Yet despite unfavorable figures, the government remained confident that the tide will likely turn starting around August, especially as it announced various supportive measures late last month including the promotion of future growth markets such as virtual reality.

Korea’s exports shrank 10.2 percent year-on-year in July, according to the Ministry of Trade, Industry and Energy on Monday, continuing a decline of 19 consecutive months.

In July, Korea exported $41 billion and imported $33.3 billion in goods.

The 19-month decline is the longest declining streak since March 2002 and this is the first time in three months Korea’s exports have reported a double-digit fall, the last time being in April when it fell 11.1 percent year-on-year.

The trade ministry cited shorter business days last month as well as the weak shipbuilding industry as the primary cause of last month’s drop.

“There were fewer business days in July compared to the previous year,” said Lee Min-woo, a director at the Trade Ministry, “and the fall in crude oil prices, which has rebounded a little, also had negative impacts on Korean exports.”

In fact, the total business days were 1.5 days fewer in July compared to a year ago, and Dubai oil prices fell from $46.3 per barrel in June to $42.5 per barrel last month.

Two major causes can be traced to the automobile industry and the export of ships.

“Productivity fell due to labor union strikes in the automobile industry,” Lee said, “and this negatively affected exports.”

Moreover, according to the Trade Ministry overall exports in July saw the best performance of the year - excluding that of vessels.

Export volume, excluding vessels, fell only 1.6 percent in July compared to the previous year, the lowest drop this year. Exports of vessels, on the other hand, fell 42.5 percent during the same period, according to the Trade Ministry.

“Exports of computers rose 39.1 percent year-on-year and this was the best performance since Jan. 2010,” said Lee. “It appears that the demand for new computers and computer-related products increased as July was the last month to receive a free upgrade to Windows 10.”

By region, total exports to Vietnam rose for the sixth consecutive month and grew 7.6 percent last month, largely thanks to the free trade agreement between Vietnam and Korea that went into effect in December.

“Exports to these countries continued to be weak but the drop was lower compared to the first half of this year,” said Lee, “and we believe this is a good thing.”

“We believe the global economy and trade will improve in the second half of this year compared to the first half,” said Lee. “However, we do understand that there are uncertainties, such as Brexit and a slowdown in emerging markets. The government will try to help exporters in a variety of ways, including financial supports and incentives, so that they can enter foreign markets more easily and diversify export items.”

The government announced plans to boost exports last month. The Trade Ministry said it will double the size of trade finance for small and midsize exporters to 14.3 trillion won ($12.8 billion) and will consider restoring tax cuts for general trading companies.