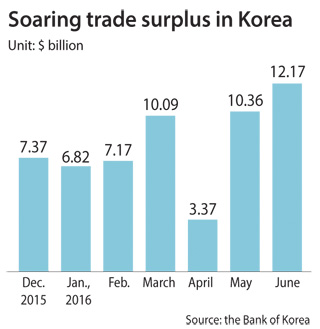 Korea’s trade surplus hit a new record high in June despite falling exports, as low oil prices contributed to a decrease in energy imports and a boost in the goods account balance.

The current account surplus reached $12.17 billion in June compared to an $11.87 billion surplus from a year ago, marking a 52nd consecutive monthly surplus, according to preliminary data released by the Bank of Korea on Monday.

The latest result puts the first half’s surplus at $49.98 billion, down 0.75 percent from the previous year.

The combination of falling exports and a widening surplus indicates that Korea’s imports fell at a faster pace than exports, maintaining a so-called recession-type surplus trend.

Details showed that a surplus in the products account totaled $12.82 billion, up 19 percent from the previous month’s $10.74 billion.

By contrast, the services account deficit rose 21 percent to $1.38 billion, from $1.14 billion over a month ago, because of the widened deficit in the travel account.

Exports fell 7.4 percent from a year ago to $45.3 billion, while imports saw a sharper drop of 10.2 percent to $32.4 billion. When compared to the previous month, exports were down 2.4 percent, while imports tumbled 8.6 percent.

Exports to the biggest trading partner, China, remained almost unchanged when compared to the previous month, as it retreated 9.4 percent. However, this is a sharp turnaround compared to the same month a year ago, when Korea’s exports inched up 0.6 percent month on month.

The sharp decline of 7.7 percent in imports was overwhelmingly driven by low oil prices, as the data excluding oil-related energy imports would have reported a slower 2.8 percent decline year on year.

Primary income saw a surplus of $1.26 billion thanks to a rise in dividend incomes. This is also up from the $910 million recorded in May.

As for financial accounts, there was an outflow of $3.98 billion from domestic investors, compared with the previous month’s $5.07 billion. Securities investments also saw a net outflow of $2.22 billion on net selling of local securities by foreign investors.

Derivatives, on the other hand, saw a net inflow of $370 million in June.

Despite the positive trade balance, the central bank refrained from being too rosy. When asked whether Korea would be able to make an annual trade surplus of over $100 billion this year, Park said that the Bank of Korea is maintaining an initial estimate of $95 billion this year.

“In the second half, there are different market uncertainties involving the Brexit issue, the direction of monetary policy in advanced countries and the slowdown in China’s economy,” Park said.

Advanced countries including the United States have toughened their monitoring of Korea due to what they see as an excessive trade surplus. The United States put Korea and four other countries on its monitoring list in April in order to watch for unfair exchange rate policies.

With the measure, Korea faces pressure from the United States to reduce its surplus made from exporting goods to the U.S. market and limit the government’s intervention in the foreign exchange market.

Korea’s goods exports to the United States stood at $2.83 billion in 2015, while its current account surplus posted 7.7 percent of gross domestic product. The U.S. Treasury Department said that Korean authorities seem to have stepped in, selling $26 billion total from late 2015 through March 2016.