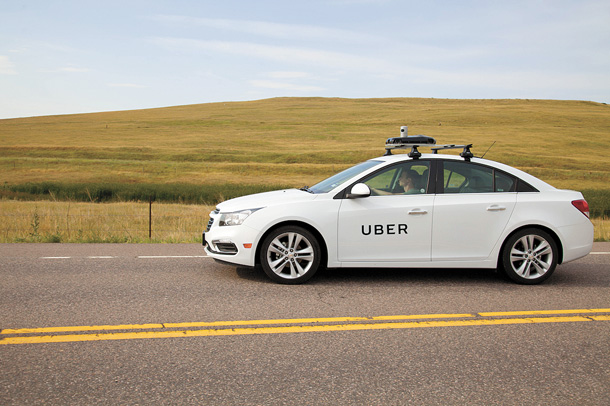 A Uber car maps the road in the United States. [UBER]

Uber is spending $500 million to establish its own mapping system to shave its reliance on Google Maps and to accelerate a move toward a driverless car ecosystem.

According to Uber and the Financial Times, the ride-hailing giant began putting mapping cars on the road in the United States to record surroundings and capture images last year and the vehicles are hitting the road in Mexico this summer. The company vowed to expand the car-mapping process to other countries.

“Existing maps are a good starting point, but some information isn’t that relevant to Uber,” said Brian McClendon, vice president of advanced technologies, in a statement Wednesday. “There are other things we need to know a lot more about, like traffic patterns and precise pickup and drop-off locations. Moreover, we need to be able to provide a seamless experience in parts of the world where there aren’t detailed maps - or street signs.”

Google Maps powers the Uber app in more than 60 countries, including Korea. McClendon led the Google Maps operation for a decade before he joined Uber last year.

Uber’s announcement comes ahead of the Korean government’s decision regarding Google Maps, in less than two weeks. The Korean operation of Google applied on June 1 to the National Geographic Information Institute under the Ministry of Land, Transport and Maritime Affairs to allow it to carry a precise 1:5,000 scale map data - the most detailed among all data currently available in Korea - outside of Korea. It marks the second attempt since the ministry declined its request six years ago.

An act on the establishment and management of spatial data stipulates that a map or a photograph for survey is prohibited from being manufactured and carried out of the Republic of Korea. Google is demanding that the government issue it permission to save the data in multiple centers outside of Korea so that it can process the information there and normalize the map service like in other nations.

Unlike most other countries, Korea has a limited range of services on the Google Maps app. The map is able to recognize a user’s location and shows streets and roads in detail but doesn’t provide real-time traffic information and navigation services. The ministry bans the export of precise map data abroad, according to a Google spokeswoman. The partial Google Maps service is complicating its use in Korea and hampering the growth of many start-ups that may take advantage of the service, the company says. In Korea, homegrown apps from Naver and Kakao are dominant for mapping and navigation.

The first meeting took place on June 22 and the second gathering is scheduled for August 12, when there is a high probability that the government will conclude on the long-standing issue. Even though the deadline is only 10 days away, however, the two sides have yet to narrow their differences.

“Google has cited tourism service and new businesses as key sectors afflicted by the limited Google Maps service,” said a deputy director at the institute, “whereas our attention lies more in national security and in how Google references Korea’s easternmost Dokdo islets on Google Maps seen from outside of Korea. Google Korea doesn’t seem to be interested in complying with our request such as blocking the visibility of key military facilities on the map.”

But the map data that Google have applied for approval to export does not contain “any sensitive information,” Google Korea argues.

The Korean unit, which is also under investigation by the Fair Trade Commission for violating antitrust regulations for its dominance in Android operating system, has also come under fire for trying to evade taxes by minimizing its Korean operation - including the measure of not running a data center. An easy solution for the confrontation between the Korean government and Google Korea would be the latter setting up a data center in Korea, critics have proposed.

However, Google says establishing a data center in Korea would not solve the problem of the map services in Korea.

“Google services, including Google Maps, are provided on a cloud platform basis, which means that the data Google uses have to be stored across multiple data centers around the globe,” said Kwon Bom-jun, a software engineer at Google Korea. “Even if Google were to build a data center in Korea, a map data export license would still be necessary to offer full Google Maps services in Korea for worldwide users.”