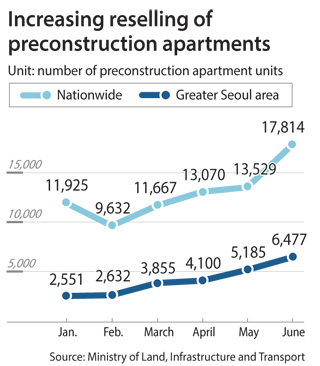 The government has found that 3,000 individuals profited from selling preconstruction apartments more than three times in the past year and a half. The government considers these individuals speculators who are driving up prices in the real estate market and plans to crack down on the illegal practice.

“These short-term profiteers are traveling across the country mostly targeting small and midsize apartments that are smaller than 85 square meters [915 square feet],” a ministry official said.

The government has reported some 200 transactions to the National Tax Agency on suspicions that they benefited from lower taxes by undercutting the transaction value. A 50 percent tax is levied when selling preconstruction apartments within less than a year of the initial purchase.

After the unregistered realtors win apartment bids, they profit by selling the preconstruction apartments to other homebuyers for a higher price.

Because buying a preconstruction apartment is not categorized as owning the unit, the buyer on paper is not labeled as an owner, which raises the chances of winning bids on preconstruction sales.

Many of these speculative preconstruction purchases are mostly concentrated in small and midsize apartments because 40 percent of units that are 85 square meters or smaller provide better chances of winning bids, since they do not require prerequisites such as previous homeownership or a certain annual income.

In the case of units that are 85 square meters or larger, everyone who applies for the apartments are randomly picked, making the chances less favorable.

“These unregistered relators manage as little as 10 housing-subscription accounts and as many as 100 or so, and they use the ones with a higher possibility of winning bids while allocating almost all of the accounts that they are managing to larger apartments that go through random lotteries [to raise their chances],” said an official who specializes in preconstruction sales.

The ministry has decided to heighten their oversight from the early stages of preconstruction sales. It plans to analyze data from the Korea Financial Telecommunications and Clearings Institute as well as preconstruction sales transaction information and ask police to investigate buyers who violate any laws, including falsifying residential addresses.

During the process of preconstruction sales, those who live in the neighborhoods of apartments on sale have better chances of winning the bid. The restrictions are considered pretty loose. In the case of the greater Seoul area, the person only needs to have lived in the neighborhood for a year, while in Busan and Daegu, a buyer only has to have been a resident for three months. Such loose regulations have allowed people to falsify their residential address, especially since their actual residency status is rarely confirmed.

The government said Monday that it has opened a center where people can report any illegal activities regarding preconstruction sales and will enforce monthly investigations on sales.

“The illegal transactions on preconstruction apartment sales that have been caught is only a small fraction of the activities that have been going on in the shadows,” said Kwon Dae-joong, a real estate professor at Myongji University. “We should revive the regulations where people who win a bid on preconstruction apartment sales are banned for a certain period from making another bid.”