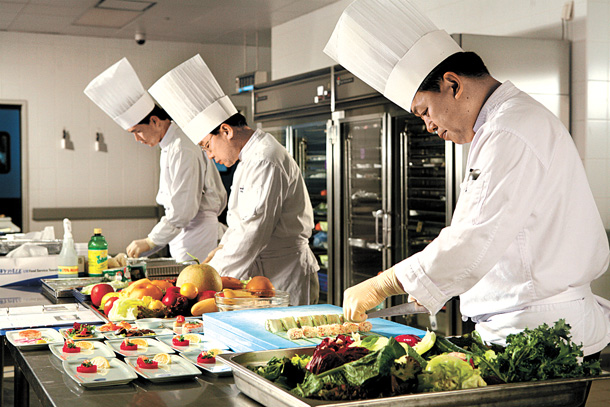 Korean Air, the nation’s largest airline, produced a record-high number of in-flight meals in the company’s history on Saturday, making enough that day to serve 84,936 passengers.

The company said Monday that the larger number is related to an increase in passengers aboard the airline’s flights leaving from Korea to overseas countries.

The number of passengers on Korean Air’s flights peaked on Aug. 1 last year, which resulted in the company making meals for 77,339 passengers. The amount produced on Saturday beats last year’s one-day record by 7,597 packaged meals.

Since the airline began producing in-flight meals in 1969, the production rate has been on a gradual rise. Between Feb. 6 this year, around Lunar New Year, and last Wednesday, the number of packaged meals jumped by 427, from 79,905 to 80,332.

Korean Air is currently supplying meals not only for its own flights but also for flights operated by 49 other companies including Singapore Airlines, Air France and British Airways, all of which have flights departing from Korea.

Korean cuisine makes up a majority of the in-flight meals. An average of 3,600 packages of bibimbap (rice with mixed vegetables and meat) are produced on a daily basis.

Other than bibimbap, there are about 1,400 different types of in-flight menu items including bulgogi (marinated beef), dakbaeksuk (whole chicken soup) and a variety of sandwiches, sushi and salads.

The menus also include 140 different breads such as soft rolls, croissants and muffins.