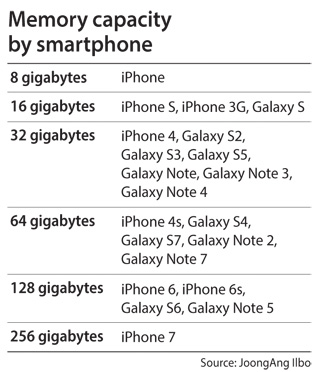 Jung Mi-seon, who recently became a mother, wanted a high-capacity smartphone with enough space to store all the photos and videos of her 1-year-old baby. She found her 32-gigabyte model, which can store about 64 hours of high-definition video, was not enough and opted for a more expensive 64-gigabyte phone that cost 50,000 won ($45) more.

“I tend to back up all the data in a cloud service online, but even that wasn’t enough because the pictures and videos were high-definition,” Jung said. “Moms like me who often record videos of their babies actually need more than 64 gigabytes.”

Many electronics companies are catching on to the needs of consumers like Jung who need more storage space on their devices. As smartphone cameras become more sophisticated, the quality and file size of captured pictures and videos are increasing. On average, a two-hour high-definition video clip takes up 1 gigabyte of space, and an ultra-high-definition video clip of the same length is 5 gigabytes.

Industry experts believe that further development of virtual- and augmented-reality content made with 360-degree cameras in the future will create even more demand for higher smartphone storage capacity.

Samsung then released a 256-gigabyte micro SD card in June, this time featuring a picture of its flagship Galaxy S7 smartphone on the package, to promote the external memory card as a complement for smartphones.

“In the past, the micro SD card market was reserved for drone or action-cam users,” a company spokesperson said. “But nowadays, many consumers are buying the storage cards for additional memory, so we’re expanding our marketing targets.”

One of the most dramatic changes in smartphone models that are set to be released later this year is the increased storage capacity. Industry experts say Samsung’s Galaxy Note 7, set to launch this month, is likely to come in only a 64-gigabyte model. Apple’s iPhone 7, set to launch next month, is expected to have a 256-gigabyte model, the first among Apple’s products, alongside 32-, 64- and 128-gigabyte options.

In the late 2000s, when the smartphone market was in its infancy, the storage space of most products ranged from 4 to 8 gigabytes. Smartphone cameras back then captured low-definition pictures and video that required less storage space.

The market changed in 2012, when manufacturers started to equip their premium smartphones with 10-megapixel cameras. Now, devices can capture up to 4K ultra-high-definition videos, but even 256 gigabytes of storage is not enough to save a 4-hour video shot at that quality.

According to global market research firm IHS, the average capacity of built-in NAND flash memory chips for smartphones is likely to double from last year’s average of 20.4 gigabytes to 42.1 gigabytes by next year. IHS predicts that 512-gigabyte smartphones may be released by 2018.

“Multimedia content is moving from TV to smartphones, so it’s only natural for customers to seek higher storage capacity,” said Kim Ji-san, an analyst at Kiwoom Securities. “As the technology, especially for cameras, continues to advance, the demand for memory will be great enough to develop into a profitable market.”