Driver who killed three may have passed out

Driver who killed three may have passed out 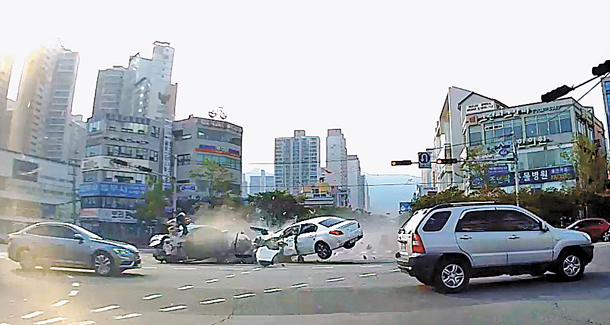 A Peugeot crashes into cars at the intersection of Haeundae Cultural Center in Haeundae District, Busan, on Sunday. The accident, which involved seven cars in total, killed three and injured 14, including the driver. [BLACK BOX SCREEN CAPTURE]

BUSAN - A Peugeot traveling at more than 100 kilometers (62 miles) per hour ignored traffic lights at a crossroad in Haeundae District in Busan on Sunday and crashed into six other cars, killing three and injuring 14, including the driver.

The driver, a 53-year-old man surnamed Kim, was traveling between 100 and 120 kilometers per hour and allegedly did not hit the brakes even when he neared the crosswalk at the intersection of Haeundae Cultural Center, according to police.

The Peugeot hit a Hyundai Accent waiting at a red light, skidded and hit four people crossing the street, including a woman in her 40s, her teenage son and a middle school student. The mother and her 18-year-old son were visiting Busan on a family vacation. All three died. The Peugeot hit five more cars that were passing the intersection before stopping. The accident occurred at 5:18 p.m. Sunday.

Police said Kim was not under the influence of alcohol or drugs at the time of the accident. “I don’t remember why the accident happened,” Kim reportedly told police. “I woke up and I was at the hospital.”

Kim testified to police that he is suffering from a neurological disorder and did not take his medication on the day of the accident. Kim’s doctor in Ulsan told police that Kim was diagnosed with epilepsy last September, and that he was on medication from November. The doctor said patients suffering epilepsy can lose consciousness sporadically if they stop taking medication, even for a day.

Police will be analyzing black box and CCTV footage, witness accounts, National Forensic Service results and Kim’s medical records to determine whether Kim had indeed lost consciousness during his drive, especially given that Kim appears not to have stepped on the brakes at the crosswalk.

According to police records, Kim got into three traffic accidents in the past two years and even drove his car onto a pedestrian road. There have been previous incidents of drivers slipping into shock or unconsciousness while driving, causing accidents.

Just last month, a local court in South Gyeongsang ruled a driver not guilty of causing accidents and injuries, citing the possibility that the man, who had fallen into a diabetic shock a month before the accident, could have fallen into another one during the drive. The man had hit a car, sped past it and hit another car before stopping. He had also told police at the time that he could not remember what happened.

Police also found that Kim had initially bumped into a car about 300 meters (328 yards) from the crosswalk before the accident. Authorities are investigating whether Kim was deliberately speeding away after the hit-and-run, before he crashed into more cars and people.