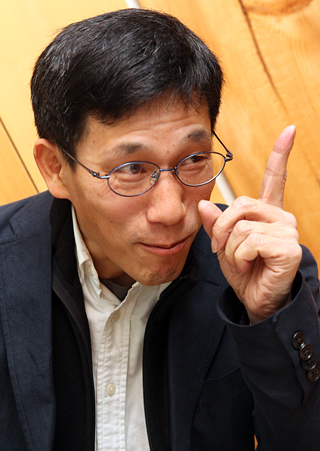 Social media sites were once touted as an invaluable way for politicians to connect with voters by conveying their unfiltered views on national affairs, creating an open discussion forum in which a free exchange of thoughts seemed possible.

But confronted with growing dominance of social media users with either right-wing or left-wing opinions, an increasing number of public figures who had channeled their thoughts through their social media accounts are shutting them down, fatigued by endless accusations thrown at them by disgruntled critics, who experts say dominate online discussion forum as they tend to be much more active than moderate users.

Jin Joong-kwon, professor of Dongyang University and a renowned political commentator, once commanded a followership of over 420,000 Twitter users, giving him considerable online influence. But weary of the seemingly endless cycle of accusations against him by his objectors, he recently shut down his account.

Jin recently suffered a firestorm of criticism when he lashed out on Twitter at prosecutors for having indicted singer Cho Young-nam on fraud charges for having paid another painter 100,000 won ($90) to draw a painting that was sold in his name. In his post, Jin said the indictment was a reflection of investigators’ ignorance of modern painting.

“On social media, there are people who collectively attack others who don’t have the means of defending themselves against such attacks just because they have different opinions,” said the prolific author. “Such actions are no different from fascism.”

Jin said the pattern of criticism waged by such active users impedes freedom of expression.

“Their behavior can be likened to a situation in which evangelicals intrude upon a discussion forum by scientists specializing in evolution and argue their theory is all nonsense,” said Jin, adding he had grown tired of such pointless back-and-forth encounters.

Seongnam Mayor Lee Jae-myung also quit Twitter following his online altercation with avid supporters of Moon Jae-in, former chairman of the opposition Minjoo Party. What caused the uproar among Moon’s hardline supporters was Lee’s declaration in a Twitter post that he would not form an alliance with any faction of the party if he was elected chairman. His remark was seen by Moon’s supporters as an attempt to distance himself from the former presidential candidate.

“Some replied to my post asking me how dare I make such a remark,” said Lee, “while others accused me of trying to frame the narrative in a conservative manner.”

Minjoo appears to be affected by social media sentiment when it comes to its position on the deployment of the Terminal High-Altitude Area Defense (Thaad) system. The party leadership made an official decision not to oppose the deployment, which raised the ire of some social media users who harbor a hardline stance against it.

Possibly as a result of strong online opposition to Thaad, all candidates bidding for party leadership at the national convention pledged their objection to Thaad.

The ruling Saenuri Party is not spared the influence of social media sentiment. After Saenuri Rep. Kim Yong-tae, who lies outside the pro-Park Geun-hye faction, was tabbed to lead the party’s reform committee, staunch Park supporters vented their outrage against the appointment. Emboldened by angry online reactions, Park loyalists demanded Kim resign, which he did two days after the appointment, at the expense of laying bare deep intraparty conflict.

“Policy decisions swayed by hardline social media users is a case of the tail wagging the dog,” said Ka Sang-joon, professor of political science at Dankook University, “and this will distance parties from moderates, who comprise the largest portion of the general public.”