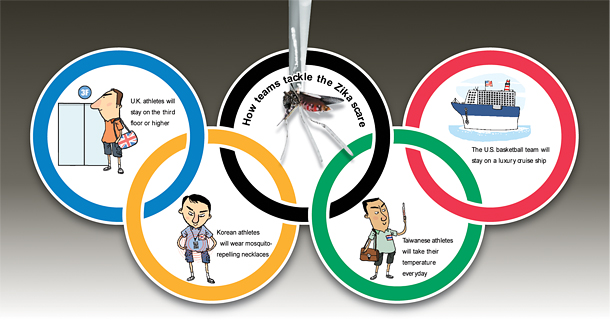 Among all the issues that cause concerns about the Summer Games, which will begin in three days, Zika virus is the one that strikes the most fear into the hearts of athletes, forcing some of the world’s best competitors, such as basketball player Stephen Curry of the United States, to skip out on the quadrennial event. While some are pulling out completely, others are staying on but with different precautionary measures that vary from team to team.

Added to the issues of political unrest and pollution, the recent outbreak of the Zika virus is another major headache for Brazilian authorities.

Anyone can be infected by the virus via the bite of an Aedes mosquito, its main carrier. Possible symptoms include fever, rash, joint pain and conjunctivitis, according to the U.S. Centers for Disease Control. However, these symptoms can be so mild that patients often don’t even realize they’re infected. At the moment, there is no vaccine or medicinal treatment, although the mortality rate is extremely low. Nevertheless, the disease is feared as it may lead to microcephaly in babies, a medical condition causing incomplete brain development.

The Brazil Olympic Committee (BOC) announced that by August, the weather will be cool enough that mosquitoes shouldn’t be a problem. The World Health Organization (WHO) concurred, saying in its announcement last Friday that the risk of Zika virus infections at the Olympic Games is both low and manageable.

Despite the attempt to assuage fears, many renowned athletes have decided to pull out of the Games, specifically citing Zika. In late June, world No.1 Golfer Jason Day said he will not be competing in Rio, saying, “The sole reason for my decision is my concern about the possible transmission of the Zika virus and the potential risks that it may present to my wife’s future pregnancies and to future members of our family.”

While some decided to skip the Games, others simply cannot miss this once-in-a-lifetime opportunity. To protect their athletes from infection, Olympics committees of each nation have come up with safety precautions.

The most extravagant of all the countries headed to Rio is perhaps the United States.

The United States basketball team, whose roster is stacked with highly-paid National Baseball Association (NBA) stars such as Kevin Durant of the Golden State Warriors and Carmelo Anthony of the New York Knicks, will stay on a luxury cruise liner Silver Cloud during the Olympics at the Maua port in Rio, a testament to how far the United States and the NBA are willing to go to protect their invaluable, and expensive, players from any possible threats. According to Craig Miller, a spokesman for USA Basketball, U.S. men’s basketball team has not stayed in the Athletes’ Village starting from 1992 Olympics, when “The Dream Team” first made in debut in global stage.

In addition, all U.S. athletes have been provided with blankets that are coated with a chemical that repels and even kills mosquitoes.

For other teams, their endeavor may seem less grandiose but this does not downgrade the level of their effort.

For the U.K., athletes will be using the third floor or above at its building in the Athletes’ Village, a decision made based on research showing that mosquito carrying the pathogen are rarely found 25 feet above ground. The Brits will use the first and second floors for storage and to house a medical office.

The Taiwanese team will hand out thermometers to each of their members in order to detect the infection early and prevent the spread of the disease.

For Team Korea, the Korean Olympic Committee (KOC) will implement various measures to fight against the Zika scare. The first among many is the outfits that athletes will wear in Rio, which are made of fabric and materials that are insect-proof.

The KOC has also prepared bug-repellant for athletes to use.

“The delegation has taken with them some 2,700 bottles of bug-repellant,” said a staffer from the KOC, “about 1,000 units of bug bite ointment and 400 mosquito nets and more.”

“We advised athletes to wear bright-colored long-sleeve shirts and pants and apply the repellant every two to three hours,” said Bae Moon-jeong, who specializes in family medicine and is a member of the medical team for Team Korea. “Female athletes will have to avoid becoming pregnant for at least two months after they return home.”

Despite the commotion, Korean athletes seemed unfazed by the Zika scare. Choi Min-ho, the coach for the Korean judokas, said, “We are aiming for gold and mosquitoes will not stand in our way.”