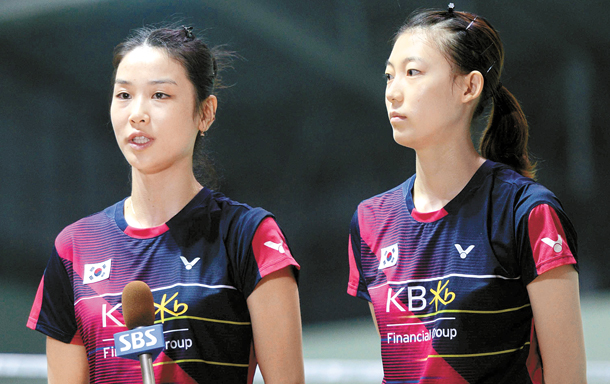 Korean badminton players Kim Ha-na, right, and Jeong Kyung-eun are headed to Rio de Janeiro this summer to make up for the disqualification from the last Olympics in 2012 when they were mired in a scandal. [NEWSIS]

SEOUL, South Korea - Badminton at the Rio Olympics will try to shake off multiple scandals and adapt to a rule change many consider to be an attempt to curb Chinese dominance.

Seen as backyard fun by many Americans, the sport is serious business for millions in Asia and parts of Europe, where throngs of people pack stadiums to watch players who are household names.

It’s less popular in Brazil, and that has some players worried about what’s in store for them.

Those who tune in will see an appealing blend of power, speed and agility, with long rallies that can seem like video games as the shuttle whizzes back and forth across the net and players stretch like gymnasts to parry smashes that can reach speeds well above 100 miles per hour.

Badminton has been rocked by scandals in recent years and its players and fans are hoping the Olympics will provide a chance for it to move on.

At the 2012 games in London, two South Korean women’s doubles teams along with a Chinese and an Indonesian team were disqualified for trying to lose early matches so they could get better draws in the knockout round.

Two of the disgraced South Koreans, Kim Ha-na and Jeong Kyung-eun, made the Olympics team for Rio. “Time has passed and I’ve moved on and grown up,” Kim said recently. “Although I still have bad memories, I will never make the same mistake again.”

The current No. 1 men’s singles player, Lee Chong Wei of Malaysia, served an eight-month ban for doping. Lee said he took an anti-inflammatory drug inadvertently. A panel later determined that he had been negligent and had not intended to cheat.

A gambling scandal, meanwhile, has hurt the chances of the recently improved Japanese men’s team. Kento Momota, a young star who had been ranked No. 2 in the world, was banned from the Olympics after admitting to gambling at an illegal casino in Japan.

China won gold in all five badminton events in 2012, and many top Chinese will again be contenders.

But competition in Rio is likely to be more open after an Olympic rule change that limits countries to two singles entrants in each event. Each country could previously enter three, something that benefited China’s deep field of talent.

Even without the change, however, the rest of the world has been gaining on China.

The current top men’s and women’s singles players are non-Chinese - Malaysia’s Lee Chong Wei and Carolina Marin of Spain - although both the No. 2 and No. 3 players are Chinese.

China’s Lin Dan, considered by many the greatest men’s player of all time, will be going for his third consecutive singles gold.

Lin won at home in Beijing in 2008 and again in London in 2012, both times against his top rival and perhaps the second greatest player of his era, Malaysia’s Lee Chong Wei, who is now considered the top gold medal contender.

Lin, currently ranked No. 3, is no longer the top-ranked player, not even in China, as he has been eclipsed by world champion Chen Long, currently No. 2 worldwide.

Both Lin and Lee are old by badminton standards: Lin is 32 and Lee is 33.

Still, Lin combines a powerful attack and agile defense with subtle net play, and many fans are hoping to see a dramatic rematch between Lin and Lee.

Brazil, however, is not a traditional badminton power and so there is some worry about fan support and the arena’s layout.

Lin Dan, who is used to huge, adoring crowds and grand badminton arenas, commented on what he considered the venue’s small size after playing a test event there last year.

Air drifts and currents are also worries when playing top-level badminton in a place that’s not used to it. Drifts can play a major, detrimental part in a game by changing the direction and speed of the shuttle, which is conical, made of 16 goose feathers stuck to a leather-covered round cork and weighs only about 5 grams.

Major drift culprits include air conditioning and the opening and closing of doors and windows.

To be fair, there were drift complaints even at the Olympics in England, where the modern version of the game was developed in the 19th century. To try to compensate for any drifts, players change ends during matches.