Living with the anti-graft law

Living with the anti-graft law 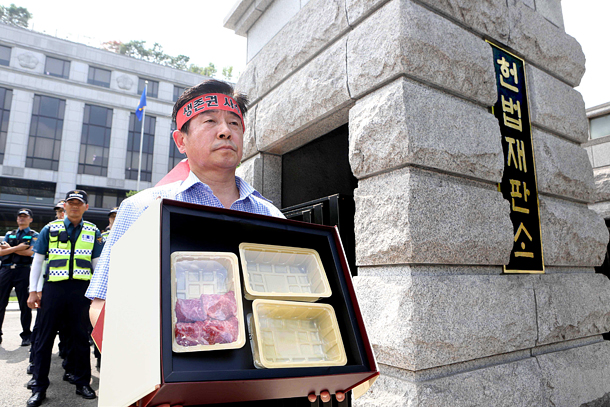 After the anti-graft act, also called Kim Young-ran Law, was ruled constitutional by the Constitutional Court last month, a senior official from the Korea Dairy Industries Association stages a protest in front of the highest court to oppose the ruling. The law bans civil servants, teachers and journalists from receiving a present priced above 50,000 won (45dollar).

Corruption seeped into him, a senior prosecutor said as he watched his former colleague Jin Kyung-joon taken away in handcuffs on Friday, after prosecution slapped multiple bribery charges on him. His conscience slowly numbed as he was indulged by Nexon co-founder Kim Jung-ju with gifts and cash rewards. He reached the point of feeling no guilt in seeing his wealth build up through shares in the game company he kept for free. He was not the first victim of corruption addiction. He was just made a poster boy.

Prosecutors stumble upon names of government officials and journalists in ledgers of corporate credit card expenditures whenever they search companies on wrongdoing suspicions. Once the Improper Solicitation and Graft Act, dubbed the Kim Young-ran law goes into effect on Sept. 28, tens or hundreds may come under investigation for violating the act that will punish public officials, teachers and journalists if they are treated with meals costing more than 30,000 won ($26) or accepting gifts beyond 50,000 won. People will have to watch what they eat and what they say.

Every invitation to a meal, drink or round of golf previously taken for granted would have to be thought twice. The people — over 4 million — falling under the broadened term of public service will have to study the menu price and guest list before attending a lunch or dinner appointment. A justice on the Constitutional Court that recently found the act placing journalists and teachers of private schools under the same guideline constitutional said that there would have to be discussions to define what is legally acceptable as part of work or what is not. Through the discussions, we may come to a consensus of legitimate scope and activity of public service and press.

The Kim Young-ran Law is not designed to hamper the freedom of civil servants, press and teachers. It is specifically aimed at rooting out illicit practice of favoritism and bribery among public servants, making the press more critically watchful of the powers in political, economic and social fields, and allowing them to carry out their jobs without any constraint. In fact, the act could ensure more freedom in their profession.

There should not be misunderstanding. The idea is not to keep a meal under 30,000 won, but to share the bill. It is wrong to portray the alternative menus that cleverly cost 9,000 won or a gift with a 49,000 won price tag. The hype about denting consumption is also wrong.

Expensive restaurants could be hit, but everyday diners could benefit.

The meal and prices in the past had not come from the pockets of individuals, but from taxes or corporate coffers. The public officials and journalists used up what should have gone to shareholders and people. Policy and corporate public relations no longer can justify the spending. Expensive meals and gifts are dangerous because they can slowly make one vulnerable to the powerful and rich without one realizing it.

The Kim Young-ran Law is by no means a perfect law. Everyone has an obligation to complete it. The Anti-Corruption & Civil Rights Commission should come up with a specific set of guidelines instead of leaving the judgment to the court. Civil servants, journalists and teachers should change their way of life and carry out their business instead of trying to come up with clever ways to circumvent the law.
They should head home after work instead of drinking and dining and spend more time with their family.

The worst case is people feeling unlucky and foolish for obeying the law. People usually pay fines when their speeding is caught on camera, but complain when they are caught by the police. The law enforcement officers should carry out crackdown uniformly and strictly instead of being selective. There must be supplementary measures to prevent favoritism and strengthening of connections by background, blood, and school because of mistrust stemming from the law.

The scenes of golf clubs being fully booked or holding year-end meetings and having gift exchanges ahead of Sept. 28 are farcical. I confess I too had become immune to these customary practices. I cannot excuse myself, saying I didn’t ask for it. I had been cowardly for accepting it as if it was against my will. My mea culpa is also a self-warning.