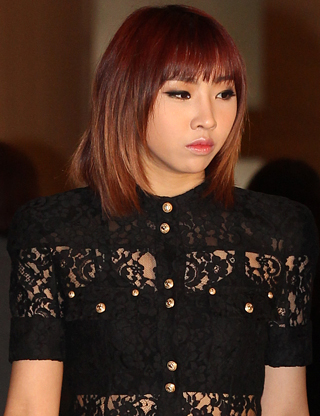 Minzy, a former member of the girl group 2NE1, confirmed to hold her first fan meet-up on Aug. 13.

The event will take place at Cine City CGV in Cheongdam, southern Seoul, at 6:30 p.m.

“It will be a free, small-sized meet-up for 40 people,” said a source from Music Works, which represents the 22-year-old singer. “Dinner and personal gifts from Minzy have also been prepared.”

The singer left her former label, YG Entertainment, when she departed from the female group in April. She moved to Music Works, which also represents the singer Baek Ji-young.

The upcoming event will be the singer’s first official event since leaving 2NE1.

Minzy is reportedly preparing her first solo release for the latter part of this year. She has been offered several songs and is currently mulling over which ones to choose.

The singer debuted in 2009, and has gained recognition for her musical talents that include singing, dancing and rapping.