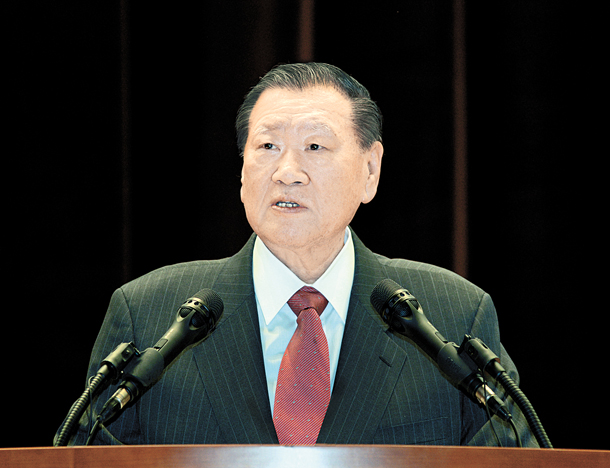 Hyundai Motor Group Chairman Chung Mong-koo left for Europe on Tuesday, his first business trip there in two years, to meet with local employees and strengthen the group’s foothold in the regional auto market, as intensifying competition and unstable business factors including Britain’s decision to leave the European Union present the company with challenges.

The trip is notable because the 78-year-old Hyundai chief is known to visit an overseas market whenever the company faces a major conflict or turning point there.

Chung’s first stop will be in Russia, where he will visit Hyundai’s plant in St. Petersburg on Wednesday. A prolonged economic depression in Russia led to a sharp drop in car demand from 2.9 million units in 2012 to 1.6 million last year.

This led many automakers to withdraw from the market, allowing Hyundai Motor and sister company Kia Motors to expand their market share in Russia. Despite selling only 324,701 units last year, both companies took up 20.3 percent of the market, up from 15.1 percent the previous year.

Chung will then head to Kia Motors’ Slovakia plant and Hyundai Motor’s Czech plant, where he will inspect production of the sports utility vehicle (SUV) lineup introduced in the European market last year, which includes Hyundai’s Tucson and Kia’s Sportage.

Chung’s tour of Europe comes as its importance in the global auto market is growing. Regional demand for cars showed 9.1 percent year-on-year growth in the first half of 2016, on par with the demand growth in China.