SKT rolls out a portable network

SKT rolls out a portable network 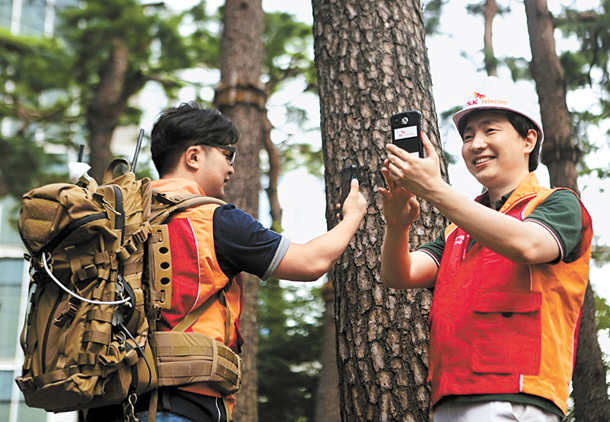 SK Telecom employees test the company’s new portable LTE, or Long Term Evolution, system device jointly developed with Nokia. The device is able to rely on its own network and is installed with technology that allows first responders to use the device for emergencies. [SK TELECOM]

SK Telecom, Korea’s largest wireless carrier, and Nokia announced Tuesday that they have jointly developed a backpack-sized portable LTE network system for use in emergencies.

The tech companies say the portable LTE, or Long Term Evolution, system creates an independent communications network to be used by first responders. The developers say it is now the smallest portable network system.

Previously, the existing portable network system worked only as a base station, which needed to borrow technological aid from satellite or wired networks, to communicate with remote transmitters. In cases of bad weather in remote regions, satellite networks worked improperly or service was cut off. The number of devices that could be connected to the system was also limited to 20.

The new technology is expected to work independent of any network provider because it can autonomously establish its own communication network. It can also serve as a base station at the same time. Even in natural disasters, the portable LTE technology can connect as many as 400 devices that are as far as 5 kilometers (3 miles) away.

It is expected to be best utilized by first responders when they have to communicate with each other during emergencies. The network takes less than three minutes to set up, according to SK Telecom.

SK Telecom and global IT company Nokia had been working on disaster-response technologies since October, when the two companies agreed to jointly develop various technologies such as the portable LTE system as well as a real-time group communication system enabler.

“The portable all-in-one PS [public safety] LTE system is a ground-breaking solution that enables communication among first responders by setting up an independent LTE network when regular communication networks are disrupted by disasters,” Lee Jong-bong, SK Telecom’s executive vice president and head of the infrastructure division, said in a release.

SK Telecom said that the new LTE system was unveiled to the Ministry of Public Safety and Security on Monday, and the companies completed a test run in nearby mountains. The companies expect the technology will be in use by next year.

“This world’s first portable LTE solution will be invaluable when critical services are needed to respond to all kinds of disasters and emergencies,” Andrew Cope, head of Nokia Korea, said in the release.

“We are very pleased to customize our all-in-one Ultra Compact Network in cooperation with SK Telecom and local small and medium-sized enterprises to suit their individual needs.”