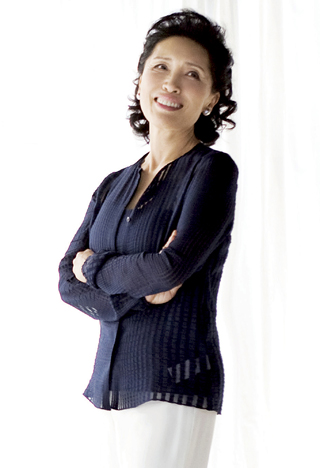 Chung Myung-wha showcased a combination of classical music and mime during 2016 PyeongChang Music Festial, where she serves as an artistic director. [2016 PYEONGCHANG MUSIC & FESTIVAL SCHOOL]

Chung Myung-wha has played Bach’s Cello Suite No. 6 hundreds of times, but a recent performance was unlike any other.

As part of the 2016 PyeongChang Music Festival on July 31, she was joined on stage by mime artist Guerassim Dichliev, who told a story in movement as she gave life to the music.

In addition to captivating audiences, Chung is also one of the artistic directors for the festival. To hear more about her performance and future plans for the event, the Korea JoongAng Daily sat down with her on Monday. The following are edited excerpts of that interview.

Q. You and Dichliev presented a rare combination of classical music and mime. How did you organize this performance?

A. Although there is a large spectrum of arts in this world, I think music and dance share a common characteristic: we both have to dive into the rhythm. In fact, it was when I was studying at The Julliard School that I first watched a mime performance on screen. And last year, when I visited Edinburgh International Festival, I encountered a mime program once again - I could suddenly recall the impression that I had when I was young. Then I headed off to prepare a special collaboration with Dichliev.

When I suggested that we play, he said the music [deeply touched his mind] and made up a story he wanted to deliver to the audiences.

For me, the allemande is so beautiful - every time I play the music, even hundreds of times, it comes to me differently.

The young pianist Son Yeol-eum has been appointed as assistant artistic director. Does this mean the festival is becoming more focused on nurturing younger artists ?

Many artists that participate in our festival were trained in the music school we operate alongside the festival. Violinist Paul Huang and Clara Jumi Kang are some examples, and Son also performed in the festival after she won the International Tchaikovsky Competition.

Just like Son, who has a rich archive of creative ideas, the younger generation of classical musicians is starting to expand their careers and is already nurturing the subsequent generation of artists. Therefore, we recognize the importance of working with them further on.

How do you plan to develop the festival further?

The PyeongChang Music Festival has grown into a renowned event that many top artists want to attend. I think it is important that we invite great artists to the festival.

We as organizers aim to maintain the quality of the music so that Korean artists have an event they can be proud of, as well as one that can help them in their careers. And I can tell you that numerous artists have already been invited to visit next year’s festival.