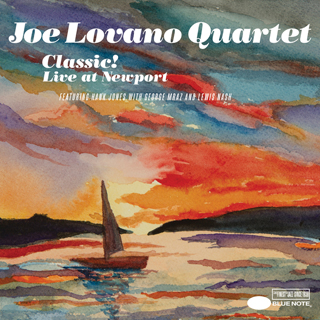 With this summer’s Newport Jazz Festival about to begin, Joe Lovano has pulled from the vaults his 2005 performance there with a quartet that included the late pianist Hank Jones, then 87.

The six-tune set features material drawn from the studio albums Lovano recorded with Jones in 2004-05. Bassist George Mraz and drummer Lewis Nash complete the quartet, and everyone is in fine form, including Jones, who makes each note count and never sounds like he’s coasting.

“Classic!” opens with the Lovano composition “Big Ben,” and he takes two quick turns before handing it off to Jones, who delivers a soulful, swinging solo. The pianist is at his best on the Lovano ballad “I’m All for You,” digging deep into the dictionary of jazz and even nodding to Debussy.

The bandleader seems inspired by his senior sideman. At times Lovano deploys a broad tone, like a painter trying to cover the entire canvas with one stroke, and elsewhere he pushes his sax to the brink with squeaks, squawks and squeals. He really lets it rip on the finale, the boisterous “Six and Four,” and Jones easily matches the pace, like the thoroughbred he was.