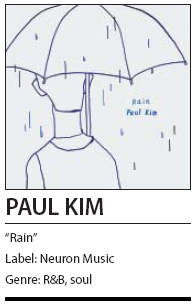 Paul Kim is back to melt hearts with his new digital single “Rain” that’s perfect for the monsoon season.

Kim stays true to his own distinctive color with the release, which he wrote, composed and produced himself. The song describes the feelings of a man after a break up, who wonders why he let his lover go. The lyrics are elegant and filled with beautiful metaphors, comparing his emotions to the falling rain or the confusion of the heart to the changing weather. The heartfelt emotions embodied in the lyrics and the slow, distinctive melody matches well with Kim’s soothing voice.

The singer, who has been charming listeners with his soft, mellow voice since his first mini album “Song Diary,” continues to amaze with his outstanding vocal skills. “Song Diary,” released in March, was an instant hit and Kim has since been holding sold-out concerts in small venues in Hongdae, western Seoul. The artist said he has been working up to larger concert halls, and last month, he sold out a 200-seat venue. He’s definitely someone to watch.