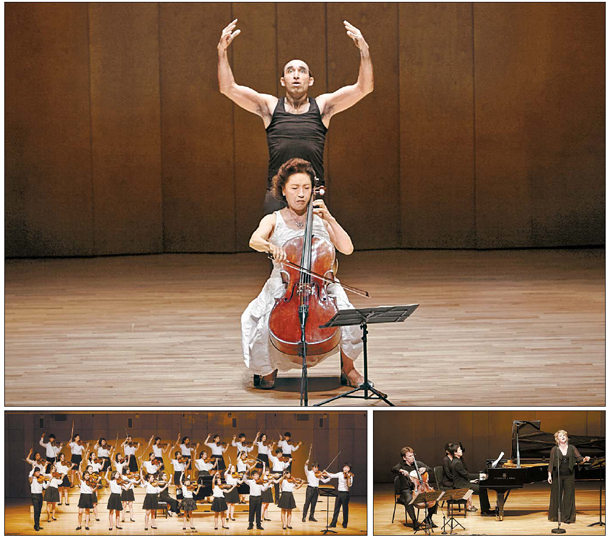 For many city dwellers, time is a precious commodity - which means there’s often little of it that can be devoted to sitting with a piece of classical music and letting its effects linger.

But at the 2016 PyeongChang Music Festival, visitors are offered the chance to get away from the bustle of everyday life and enjoy performances in a natural setting.

The festival is held until Aug. 9 at Alpensia Resort, located in Pyeongchang, Gangwon Province.

Under the theme “The Immortal Classics: Bach, Beethoven, Brahms & Beyond,” this year’s festival aims to introduce attendees to pieces composed by both well-known masters and lesser-known modern composers whose names start with the letter B.

“Bach, Beethoven and Brahms are three great fathers that stand as pillars in classical music history,” said Chung Myung-wha, a celebrated cellist and one of the festival’s organizers, in an interview with the Korea JoongAng Daily on Monday.

“But we also wanted to highlight pieces by other composers, and it is such a great joy for us as organizers to introduce new pieces unknown to many people.”

The festival’s main draw is its “Distinguished Artist Series,” which includes 13 concerts by world-renowned musicians, but it also offers other performances by rising stars.

One of the most notable in the series has been the world premiere of Christopher Berg’s “Told Tales Sweet as Untold: Three Poems of Fernando Pessoa,” which resonated throughout the Alpensia Concert Hall on July 29. Berg, a living composer, puts beautiful melodies under the texts of poets such as Shakespeare and Oscar Wilde.

The series continued the following evening, with living composer William Bolcom’s “Introduction and Rondo: Haydn Go Seek,” performed by violinist Paul Huang. It was followed by Anton Bruckner’s “Locus iste,” which was performed by The National Chorus of Korea.

Perhaps the most unique in the series has been the concert on July 31. Chung Myung-wha appeared on stage alone with her cello, and soon after she began Bach’s Cello Suite No. 6, Guerassim Dicheliev, a mime artist, appeared behind her. Using only movement, he told the story of a man who makes a cello out of a tree in a forest and imbues it with a spirit.

The festival runs through Aug. 9.

First organized in 2004 to support Pyeongchang’s bid to host the Olympic Games, PyeongChang Music Festival has since grown into one of the largest classical music events in Korea.

The current artistic directors, cellist Chung and Chung Kyung-wha, have been at the helm since 2010.

The festival is held jointly with the PyeongChang Music School. As part of that collaboration, talented young musicians are able to take classes with some of the festival’s performers. This year, students will have access to stars like pianist Shin Soo-jung, professor emeritus at Seoul National University, and violinist Kim Nam-yun.

For more information on ticket price and schedule, visit www.gmmfs.com or call 02-729-3394.