‘We urge President Park to attend our EEF in September’

‘We urge President Park to attend our EEF in September’ 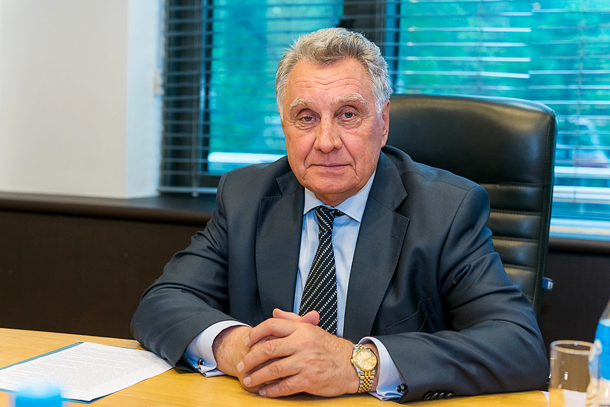 Victor Gorchakov, Chairman of the Legislative Assembly of Primorsky Krai

Russia may help thaw frigid relations between South and North Koreas, and the key to doing so lies in its Far East region, where a vast patch of land borders North Korea and China. But only with active cooperation from South Korean companies will this work, Russian authorities say.

Within the past few years, Russia has designated 20 sites in the Russian Far East as so-called Territories of Priority Development (TOR), bolstering the underdeveloped region’s economy by providing tax benefits and easing administrative procedures to attract more entrepreneurs from across the world. It also established 15 free ports. Vladivostok became the first city with a free port.

Russian President Vladimir Putin is also counting on the project.

To better appeal to Korean investors, Russia has invited South Korea President Park Geun-hye to the forthcoming Eastern Economic Forum (EEF), which is to be held in Vladivostok in September. With Japanese Prime Minister Shinzo Abe having already confirmed his attendance, it is highly likely that President Park Geun-hye will accept the invitation.

At the recently held Far East Russian-Korean Forum in June in Vladivostok, Victor Gorchakov, Chairman of the Legislative Assembly of Primorsky Krai, sat down with the JoongAng Ilbo to talk about the current state of their free-trade zone project and cooperation with South Korea.

Below are the highlights from the interview.

Q. The Rajin-Hassan Project, a symbol of economic cooperation between Russia and South and North Koreas, was temporarily halted recently. What is your stance on this?

A. This is a question I want to ask the South Korean government. I understand that it was an inevitable choice considering North Korea’s nuclear provocations, but from Russia’s viewpoint, I feel very sorry about the decision. The Kaesong Industrial Complex in North Korea may had been solely led by South Korea, but the Rajin-Hassan Project holds Seoul, Pyongyang and Moscow equally responsible. It was a rare opportunity to attract cooperation from many countries. I hoped it could possibly be a contributor in softening relations between South and North Korea, which is also one of the main reasons why the Russian government invested a large sum of money in the project. It is hard for me to say more, because it is a keen international issue. But I strongly believe the project must resume soon.

Do you think South Korea has a responsibility to push the project forward?

No, I don’t mean that, as North Korea made mistakes, too. They should have thought about the consequences of their nuclear weapon experiments. What I am saying, however, is that it is about time to come up with a compromise.

What is certain about Russia at the moment is that it is very much interested in resuming the project. On the other hand, I am not certain if China would be interested in the issue as much as we are. Russia and China have clashed over the control of Rajin.

Russian President Putin is also said to be highly interested in cooperating with South Korea for a free-trade zone in the Far East region. Can you elaborate on this?

President Putin has recently said not to consider this project as a short-term one but to think of it as a project that should be constantly mulled over for the remaining 21st century. So, at the federal level, it’s safe to say this project will last for at least 100 years. His ambition is apparent in a newly established department under the federal government, which is solely dedicated to this project.

The plans related to projects haven’t changed a bit, despite several external factors including the Ukrainian crisis. The president may have cut the budget for other projects, but there was no such budget deduction in developing the Far East region.

Against all odds, we are still going forward with the planned EEF in September in Vladivostok. We invited South Korean President Park Geun-hye to the event and we strongly hope that she can make it.

Is it Putin’s intention to establish 10 locations for TOR and 15 free ports in the Far East region?

Yes. When Putin showed his initial support for the projects, there were many ministers who opposed the idea because they were afraid that the Far East region would become an “independent state” of its own, providing diverse favors to foreign investors.

Some of them even said that such an investment-friendly region should be made in the country’s western region where it is closer to European countries. But Putin didn’t buy it. He said the free ports should be bestowed upon the Far East region.

Is it true that Russia has been feeling left out because South Korea has neglected its relations with it?

No, that is certainly not true [laughs]. We understand that South Korea has been through some international events that made it hard for them to pay attention to us. But Russians generally have a favorable attitude towards South Koreans. They are hard-working and forward-thinking.

How do you want South Korea to participate in the TOR and free ports?

What is the portion of Korean firms in the Russian Far East?

We currently have 1,019 foreign companies listed under Vladivostok’s free ports but none of them is from South Korea. But I know from my experience of meeting South Korean businessmen over the past few years that they have high interest in investing and advancing to Russia.

We also have success cases with Samsung and Lotte. Russia is changing the business paradigm from Moscow to the Far East region. Russia is interested in such areas for shipbuilding and aircraft manufacturing, which South Korea excels at. I believe it can lead to win-win growth.

How can the Far East region can contribute to improving relations between South and North Korea?

It will definitely have positive effects. First of all, the region annually promotes a regular talk between thousands of North Korean laborers who reside in the Yeonhaeju region (near Vladivostok in Primorsky Krai region) and consul generals from both Koreas on New Year’s holiday. However, we also take the North’s nuclear experiments seriously because the Yeonhaeju area borders with the North.

Yeonhaeju borders Russia, North Korea and China. Haven’t you thought about developing the area into a tourist site?

Currently, we are not considering the idea of turning the region into anything touristic.

The JoongAng Ilbo this year plans to tour the Yeonhaeju area bordering North Korea following last year’s trip to the Chinese region bordering the North. What do you think about that?

That’s a brilliant idea. We appreciate your effort to promote peace and unification. A tour to the sensitive area will call for coordination with our border guards as well as the Russian federal government, but I don’t think it would be impossible.


Is there any reason for your fondness for South Korea?