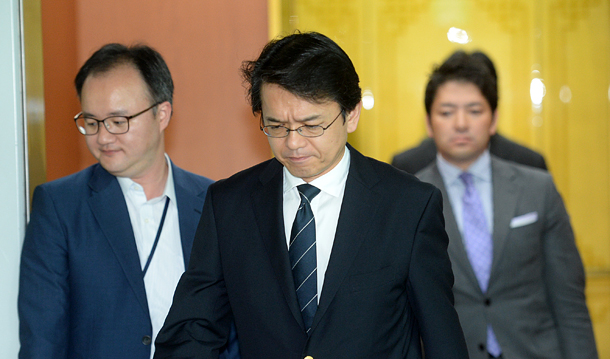 Kohei Maruyama, a minister from the Japanese Embassy in Korea, exits the Ministry of Foreign Affairs in central Seoul Tuesday, after the Korean government summoned him to lodge a formal protest against Tokyo’s claims over the Dokdo islets in the East Sea in its annual defense white paper earlier that day. [NEWSIS]

Tokyo laid claim to the East Sea’s Dokdo islets in its annual defense white paper for the 12th consecutive year on Tuesday, a move the Korean government strongly protested that same day.

Japan’s Defense Ministry submitted the white paper to its Cabinet earlier Tuesday in which it described Takeshima, Japan’s name for Dokdo, and the Northern Territories, or Kuril Islands, as its “sovereign territory,” adding that these territorial issues “still remain unresolved.”

This was immediately protested by both Korea’s Ministry of National Defense and Ministry of Foreign Affairs later that day.

In response, the Korean Defense Ministry summoned a defense attache from the Japanese Embassy in Seoul to lodge a formal protest.

Moon Sang-kyun, spokesman of the Defense Ministry, “strongly protested” Japan “repeating the act of wrongfully claiming Korea’s clear sovereign territory” as its own in the 2016 Japanese defense white paper in various maps.

He demanded “corrective measures to be taken and such acts not to be repeated in the future.”

Later that day, the Foreign Ministry summoned another official from the Japanese Embassy to the government complex in central Seoul to lodge a separate complaint.

Cho June-hyuck, spokesman of the Korean Ministry, also said in briefing later that day that Korea “protests the Japanese government’s repeated inclusion of unjust claims to Dokdo, clearly an integral part of Korea territory historically, geographically and under international law.”

He continued, “The Japanese government should immediately end such futile claims over Dokdo and make active efforts for the bilateral relationship to move forward into a new, trust-based future, while looking squarely at the truth of history.”

Japan began including Dokdo as its territory in its annual defense report in 2005 under Prime Minister Junichiro Koizumi.

The white paper also covered issues such as North Korea, noting that the regime’s military activity poses a “grave and imminent threat” to the security of Japan and the region.

It also called Beijing’s land reclamation in the South China Sea a provocation amid ongoing tensions in the waters.