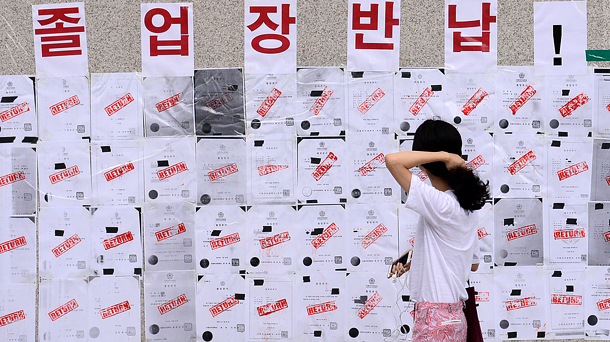 The mass student sit-in at Ewha Womans University over its continuing education college program has gone into its sixth day on Tuesday.

Around 1 p.m. Tuesday, two students were seen standing at the back door of the university’s main hall, Pfeiffer Hall. After flashing their student IDs to student guards, they received green wristbands.

“Don’t ever take off the wristband unless you want to be mistaken as an outsider,” one of the student guards told them. Both were wearing sunglasses and masks. The university estimated on Monday that some 300 to 400 students were engaged in the sit-in at the main hall. All administrative activities at the main hall have been deadlocked since Thursday.

The university president held a press conference Monday to announce the continuing education college program has been halted.

“The incident happened in the process of establishing a [four-year] continuing education college named Light up Your Future in Ewha (LiFE) College,” Ewha Womans University President Choi Kyung-hee said in a press release on Monday. “The university has many times tried to speak with the students on the matter, but efforts have fallen through.”

The university called police and the local fire department on Saturday when the sit-in protestors locked in five university staff members, including professors, for two days at the university’s main hall. In order to get past the students, some 1,600 police officers were dispatched to the scene, according to the university. The students announced Tuesday that they will not leave until the president of the university steps down.

“President Choi met the reporters first instead of meeting the students, who have long been requesting to meet with her on the issue,” their statement read. “We will not end the sit-in protest until President Choi, who called police on unarmed students, steps down from her post, and until all efforts to establish the LiFE College, which is nothing more than a scheme to sell degrees, is completely shut down.”

Choi reportedly said in the press conference that the establishment process for LiFE College cannot be completely overruled since it has been approved by the university board. The sit-in protest began on Thursday after a staff and trustee meeting on the LiFE College establishment process in the main hall. When students requested a conversation with the president on the matter, they refused to leave the main hall when their request was reportedly rejected.

“President Choi has deliberately bulldozed through the LiFE College establishment deal, without asking even once what the students think about it,” read the first press release on the sit-in posted on its Facebook Page, “Save Our Ewha,” on Sunday.

“The campus already has a continuing education center,” it continued. “And academic programs very similar to the ones planned in the Life College already exist in our university. So we cannot but think that the university is creating the college ‘for the money.’”

A group of university professors have joined the students’ cause, saying in a statement, “We are appalled that the university decided to call in police on the students.” The rally is drawing in not only the current students of the university, but graduates as well.

From Monday, some 400 copies of diplomas issued by the university have been stuck on the school’s main gate. They were sent in by graduates who intend to return their diplomas to the school, or disown their degrees, should it establish the continuing education college.

Police said on Monday that they will press for judicial action against students or leaders of the sit-in for physically locking in university staff.