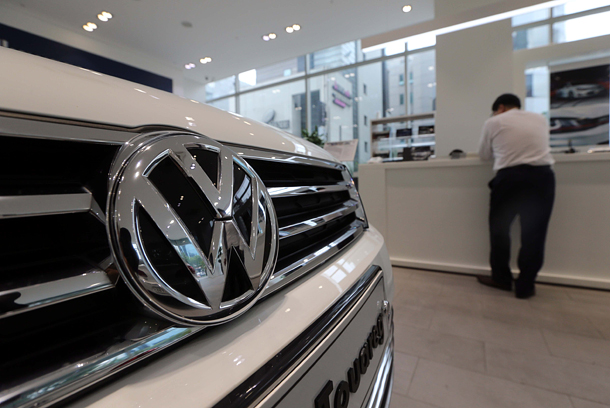 Korea banned the sale of 80 models of cars produced by the Volkswagen group including the Golf, the Polo, the Beetle and the Bentley because emissions and noise tests were falsified.

It also revoked the certification of an additional 83,000 vehicles sold by Audi Volkswagen Korea. Owners of those cars can continue to drive them but will have trouble reselling them.

The 83,000 cars were sold between 2009 and July 25 this year. The Environment Ministry revoked certifications from 126,000 cars of Audi Volkswagen Korea last November after its defeat device scandal.

Critics said the company should have been fined more.

An amendment to the Clean Air Conservation Act that went into effect July 28 increased the maximum amount of fine per vehicle type from 1 billion won to 10 billion won. With this change, the Environment Ministry could have fined the company 68 billion won.

But Audi Volkswagen Korea announced July 21 its decision to suspend sales of models under scrutiny by the ministry -- before the amendment came into effect.

“Two legal institutes advised the ministry that it is legally unsound to apply the changed regulation on the company since it suspended sales of the models under question before the amendment,” the Environment Ministry said in its press release. “Thus the ministry applied the former regulation on fines, which limits them to 1 billion won per vehicle type.”

“We regret that Ministry of Environment has imposed the sanctions against our vehicles,'' the company said in its press release. “We are currently reviewing the ministry’s decision and considering all available options in deciding how to move forward.”

Some analysts called the ministry’s move a de facto closing down of Audi Volkswagen in Korea.

“If Audi Volkswagen Korea submits new certification applications to the Environment Ministry for the models in question,” said the ministry, “then the ministry will be sure to conduct actual noise and emissions tests on the vehicles, and if needed, will visit Volkswagen AG headquarters in Germany to conduct thorough tests.”

It added, “The ministry is ready to take further legal measures should Audi Volkswagen Korea decide to take the matter to court. If the ministry wins in an administrative litigation, then it will also make sure that the vehicles sold thus far by Audi Volkswagen Korea are fined up to 10 billion won per vehicle, in following the amendment to the Clean Air Conservation Act.”

The ministry said owners of suspended cars will not be affected by the certification revocation.

“The ministry’s decision to revoke certifications of Audi and Volkswagen vehicles and to fine the company affects only Audi Volkswagen Korea, and not the customers who bought the cars,” the ministry said in its press release. “Owners of the vehicles face no restriction in owning and selling their cars.”