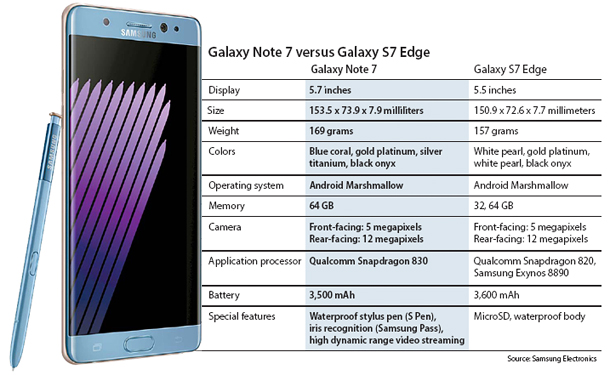 Samsung Electronics overnight took the wraps off its Galaxy Note 7 phablet with iris scanner that promises significantly added security — the first of its kind in the Galaxy series.


The device, embedded with a curved 5.7-inch display, comes with its signature S Pen stylus, which is waterproof with an Ingress Protection rating of 68, meaning it is protected from long-term immersion up to a certain pressure.


The phablet itself is also waterproof, similar to its Galaxy S7 and S7 Edge siblings released in February.


The world’s No. 1 smartphone producer says both the Note 7 and S Pen can stay intact underwater up to 1.5 meters (5 feet) deep for half an hour, easily enabling users to make memos in pouring rain.


The newly-released device has skipped the serial number 6 and is branded the Note 7 to avoid long-held confusion and facilitate marketing activities, according to Samsung.


“Samsung has been setting new standards in the smartphone market and leading the phablet category through the Note series, which has adopted a large screen and S Pen,” said Koh Dong-jin, president of Samsung Electronics. “The Note 7 will reaffirm its exclusive standing in the phablet market and provide even more innovative usability with consumers.”


The company planned to unveil the Note 7 at the Hammerstein Ballroom at 11 a.m. Tuesday in New York and said it would simultaneously throw launch events at local time in Rio de Janeiro at 12 p.m. and in London at 4 p.m.


The company chose to hold a Rio event because it is an official sponsor of the 2016 Summer Olympics set to kick off in the city on Friday.


The iris scanner on the Note 7 can be used to unlock the phone and verify the user when logging in to the Samsung Pay online payment system. Samsung has dubbed the whole process of mobile banking facilitated by the iris scanner as “Samsung Pass” and is in talks with banks in Korea including Shinhan, Woori and KEB Hana as well as major commercial banks in the United States for the new system’s adoption.


The biometric security system works by first displaying on the device’s lock screen a viewfinder for the front-facing camera. The user is then asked to position his or her eyes into two circles from a distance of 25 to 35 centimeters (10 to 14 inches). An infrared ray is beamed into the eyes to take a photo and recognize the iris. The image is then converted into digital information, which is encrypted and compared with already registered iris information.


The most dominant security and user recognition method in mobile devices thus far has been fingerprint scanning. Apple implemented the fingerprint scanner in the iPhone 5S in 2013. Samsung, HTC and Huawei followed suit. Japan’s Fujitsu was the world’s first smartphone maker to offer iris recognition in May last year.


Samsung’s waterproof and dust-proof S Pen for the Note 7 has diversified features and enhanced usability.


The diameter of the pen’s tip has more than halved from 1.6 millimeters on the preceding Note 5 to 0.7 millimeters, and the pressure sensitivity has been enhanced to make it more like a real-life pen. The S Pen makes it possible for users to select a segment in a video and save it in GIF format. The pen can also be used to magnify text as it hovers over the device’s screen and can also translate words.


Samsung will begin accepting preorders for the Note 7 in both Korea and key markets abroad on Saturday. The company is poised to wage competition against Apple’s iPhone 7, which is expected to launch on Sept. 7.