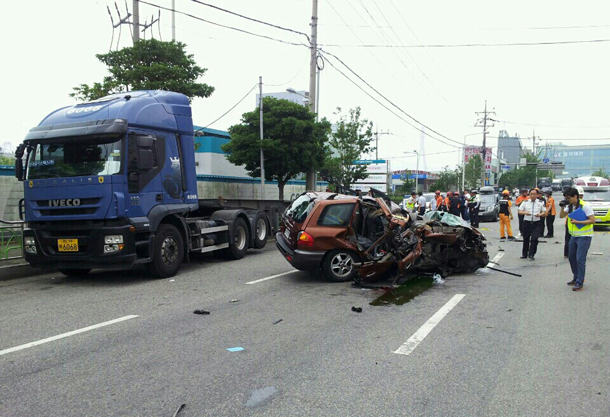 A Hyundai Santa Fe SUV crashed into a truck that was illegally parked on the side of the road at an intersection in Nam District, Busan on Tuesday. The accident resulted in the deaths of four family members. Only the driver survived. [BUSAN FIRE DEPARTMENT]

Four people out of a family of five died in a collision with a truck that was illegally parked on the side of the road.

The family was in a Hyundai’s Santa Fe SUV near an intersection in Nam District, according to Busan police, at around 12:25 p.m. on Tuesday when they crashed their vehicle to an illegally parked truck around the corner. The passengers included the 64-year-old driver, surnamed Han, his 60-year-old wife, their 33-year-old daughter and their two grandchildren, ages 3 and 1. Han was the sole survivor.

He was transported to a nearby hospital and regained consciousness but was unable to speak at that time due to shock.

The truck driver who illegally parked his vehicle about 15 minutes prior to the accident was not present because he was having lunch in a nearby restaurant. Police are still determining the level of the truck driver’s responsibility.

Han’s daughter, who lived in Changwon, South Gyeongsang, was visiting her parents’ home in Nam District with her two children. The family was going to Busan’s Dadaepo Beach for vacation. The police investigation revealed that the passengers did not have their seatbelts on, except for Han. Han’s daughter held her children in her arms because the vehicle did not have a car seat for infants.

The SUV rear-ended the truck, which was parked in the third lane when the SUV was turning left towards a wharf from an intersection, according to police. The SUV’s front passenger side collided with the left rear-end of the truck.

Footage from a car video recorder aboard the SUV shows Han complaining about his car being defective and police are investigating whether Han’s statement had any relation to the cause of the accident.

Later, the footage ends with Han saying “Oh no, what should I do?”

Han stated in his testimony to police that “the brakes suddenly didn’t work and I got into an accident.”

The paternal grandmother of the deceased children said, “Han worked as a taxi driver for a long time and he couldn’t possibly have made this kind of mistake.”

Police have sent the SUV to the Korean National Forensic Service (NFS) to request a detailed analysis of the vehicle. The NFS is also expected to conduct a joint investigation with the Korea Traffic Authority to find the exact cause of the accident.

A person affiliated with Hyundai stated, “We are currently unable to comment on this matter since the police investigation has not come out yet.”