Graffiti punks are back in stations

Graffiti punks are back in stations 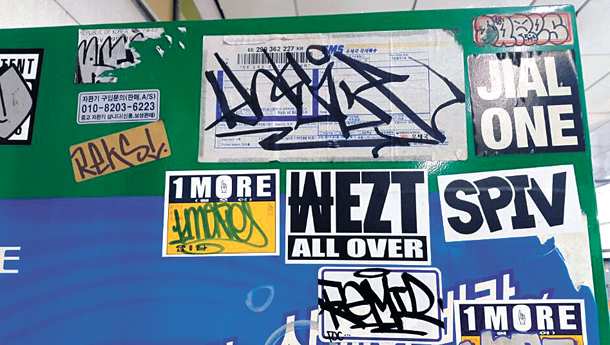 On June 26, a vending machine inside the Express Bus Terminal Station on subway line No. 3 was found defaced with graffiti. [SEOUL METRO]

Graffiti has been spotted in at least 20 subway stations over the past two weeks. Unlike the elaborate work of graffiti artists - with a distinct aesthetic or message - the recent graffiti were mere scribbles done in less than a minute.

There’s a history to Korea’s subway graffiti problem. In May 2016, a subway car idled in a garage in Incheon was found with two drawings spraypainted on it.

In May 2015, a Latvian graffiti artist and three others were arrested for defacing Seoul Metro subway cars. In February 2015, a group of four Australians fled Korea after covering subway cars in Wangsimni, Anam, and Sinnonhyeon stations in graffiti.

The Korea Railway Police feared that foreign graffiti artists were targeting its cars - and circulating information on how to penetrate certain stations with lax security.

Current law states that graffiti corresponds to property damage described in Article 336 of the criminal code. Guilty parties can be imprisoned for a maximum of three years or fined up to 7 million won ($6,290).

Additional punishment is possible if multiple people were involved, according to the Law on Punishment of Violent Acts.

However, it is not easy to track down graffiti aficionados, since they work stealthily.

“We have found through CCTV footage that there was one culprit involved, but it is difficult to detect the identity of the suspect,” said a police official in charge of a recent graffiti case at Jamsil Station on subway line No. 2. “The person in question committed the crime and fled within a minute. Obscure scribbles 30 cm (1 foot) wide and 50 cm (1.6 feet) tall were written in marker on the walls of a passageway.

“Foreign culprits are more difficult to arrest since many have left the nation when investigations have started,” said Kim Hyeon-mo, an investigator of the Korea Railway Police.

“Unauthorized graffiti is nothing less than a crime,” said Ji Sung-jin, a Korean graffiti artist. “Even Korean artists seek approval to draw on walls.”

In the West, graffiti long ago was elevated from mere vandalism to a form of art. Banksy, a British graffiti artist, is known to convey social messages through his works, denouncing the unbridled power and capitalism in the art world.

He is also famous for a mural on the Separation Barrier in Jerusalem urging peace.

“Graffiti speaks for the spirit of freedom, and plays a pivotal role in expanding freedom of expression,” said Lee Tae-ho, a professor at the College of Fine Arts at Kyung Hee University.

“South Korea inflicts overly harsh punishments for graffiti. If we see that cities, including the walls and roads, belong to the citizens, a freedom of expression inside the cities must be approved.”